The Bold and the Beautiful Spoilers: Week of April 20 – Penny Knocks Flo Out – Sally Panics as Wyatt Arrives, Ties Up Hostage 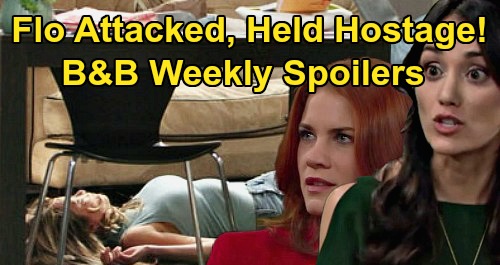 The Bold and the Beautiful (B&B) spoilers for the week of April 20-24 tease that some shockers are on the way. The action’s about to heat up, so let’s dive in and talk about what you can expect. For starters, Wyatt Spencer’s (Darin Brooks) guilt will intensify. He hated telling Sally Spectra (Courtney Hope) it was time for her to leave the beach house, but he’s about to feel even worse soon.

Once Wyatt updates Katie Logan (Heather Tom) and Quinn Forrester (Rena Sofer), they’ll agree on something for once. Katie will likely think Wyatt’s wrong for kicking Sally out at a time like this.

After all, being near Wyatt is Sally’s dying wish – at least as far as they know. Katie will probably argue that Flo was wrong to suggest this, and it seems Quinn will back her up on that.

Wyatt will start to worry that he’s made a mistake, so he may think he needs to undo it. Perhaps Wyatt will decide he can bring in a nurse or two to be there for Sally. There’s really no need to ship Sally off like Flo wants.

Of course, B&B fans know Sally isn’t actually dying. She’ll be in the middle of a heated confrontation with Flo while Wyatt’s guilt is revving up.

As for Wyatt, he’ll get advice from Bill Spencer (Don Diamont). Bill’s also feeling guilty these days thanks to that kiss he shared with Brooke Forrester (Katherine Kelly Lang).

The Bold and the Beautiful spoilers say Wyatt and Bill will do some father-son bonding. Bill will help Wyatt work through his complex feelings as they reflect on they pain they’ve both caused.

Meanwhile, The Bold and the Beautiful spoilers say Flo will set a trap for Sally. She’ll apparently try to trick Sally into admitting she’s a fraud, but Dr. Penny Escobar (Monica Ruiz) will make a mess of things. Once Penny enters the mix, she’ll knock Flo out cold and leave Sally panicking over her partner in crime’s move.

Penny may be just as horrified when she realizes what she’s done. The whole situation will spiral out of control, so Sally will wonder if this wild plan is even worth it anymore.

Unfortunately, Penny and Sally will be in too deep to back out now – especially once Wyatt shows up. Wyatt may be there to tell Sally she can stay after all, which would be music to Sally’s ears under any other circumstances.

In this moment, however, Sally will be more concerned about hiding Flo’s unconscious body. It looks like Sally and Penny will have to get rid of Wyatt and get creative soon after.

Will Penny and Sally tie Flo up? Will Flo be held hostage somewhere until Sally and Penny can figure out what to do? That seems likely since it’d keep this B&B storyline going a bit longer.