The Bold and the Beautiful Spoilers: Flo Attacked, Knocked Out – Sally & Penny Hide Victim From Wyatt 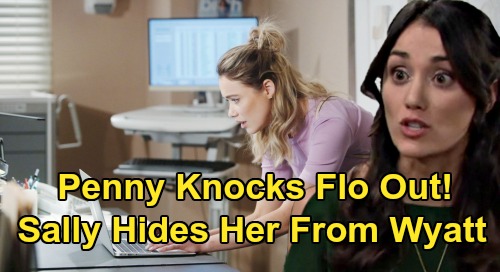 The Bold and the Beautiful (B&B) spoilers tease that Sally Spectra’s (Courtney Hope) plan will take a dangerous turn. Sally just wants to lock in her future with Wyatt Spencer (Darin Brooks), but Flo Fulton (Katrina Bowden) keeps getting in the way. Flo will soon sneak a peek at some of Sally Spectra’s (Courtney Hope) medical details, so the walls will start closing in.

Dr. Penny Escobar (Monica Ruiz) will realize the jig may be up, so that’ll lead to a split-second decision that changes everything. During the week of April 20-24, The Bold and the Beautiful spoilers say Penny will bash Flo in the head.

After Penny realizes Flo’s been snooping, the doc will knock Flo out and hope to keep the terminal illness scam secret from spreading.

Sally will reel over Penny resorting to violence and leaving them with such a huge problem. After this showdown plays out, The Bold and the Beautiful spoilers say Sally and Penny will argue over Flo’s unconscious body. This is a twist Sally never imagined so she won’t have any idea what to do next.

Penny will naturally be in panic mode, which won’t help matters. Sally may urge Penny to shut up so she can think, but there won’t be much time for that. It turns out Wyatt will arrive as Penny and Sally are dealing with this unconscious Flo crisis.

B&B fans can really expect alarm bells at that point! How are Sally and Penny going to explain this? They may realize there’s no way they can, which could lead to turning Wyatt away. Perhaps Penny and Sally will convince Wyatt to leave before he catches a glimpse of Flo out cold.

Then again, it’s possible Wyatt will barge in and see the aftermath before they can make another move. In that case, Penny and Sally would have to spin some sort of story – most likely one that makes Flo look like the aggressor who was taken down in self-defense.

However, that’d be a pretty hard sell, especially since Wyatt thinks Flo is so saintly. Sally and Penny’s best option is to just get rid of Wyatt if they can. From there, they’ll have to decide what to do about down-for-the-count Flo!