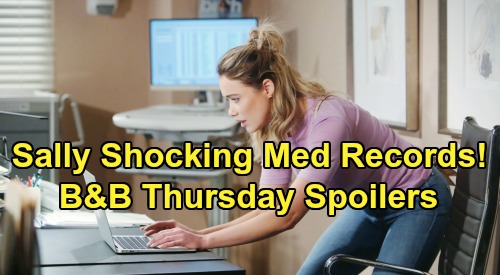 The Bold and the Beautiful spoilers for Thursday, April 16, tease that Flo Fulton (Katrina Bowden) will get sneaky as she works to investigate exactly what’s going on with Sally Spectra (Courtney Hope). As B&B viewers know, Flo and Wyatt Spencer (Darin Brooks) have just asked Sally to move out of the beach house.

Sally was livid under the surface, but for appearances’ sake she had pretend to be gracious and agree to find an appropriate care facility in which to reside.

Well, Flo seemed to not really buy Sally’s gracious act. Ever since Wyatt told Flo about how Sally tried to kiss him and agreed to seek treatment only if they’d reconcile, Flo has had a funny feeling about Sally’s true motives.

Of course, Flo doesn’t know at this point that Sally is a total fraud and has been faking her illness, but it looks like Flo will soon get a pretty big clue that Sally has been lying big time.

According to B&B spoilers, Flo will go back to the hospital to see Dr. Penny Escobar (Monica Ruiz). Whether Flo goes to see Penny with the specific intent of getting access to Sally’s private medical information remains to be seen, but she’ll show up at Penny’s office and end up getting a peek at her laptop…with Sally’s medical records on full display.

Whatever Flo sees is going to completely shock her, and she’ll gasp, “Oh my God.” Will she see that Sally’s actual diagnosis was simply a stress reaction?

Chances are, it will be what Flo doesn’t see in Sally’s records that will be the big shock, since there should certainly be no mention of a terminal illness! Flo should be absolutely stunned, and it looks like from here she’ll start to put together exactly what Sally is trying to pull.

As B&B viewers know, Katie was collateral damage in Quinn’s scheme to “out” Brooke’s cheating ways. Well, Katie might have some harsh words for Quinn, although there is probably a part of Katie that’s glad she saw the video.

Katie probably doesn’t approve of the manner in which Quinn exposed the video for everyone to see, but she’s likely glad that she knows about Bill and Brooke’s kiss. It might really hurt, but Katie doesn’t want to be played for a fool, and she’s probably glad she found out before things went any further between Brooke and Bill.

Well, at any rate, Quinn and Katie will hash things out on Thursday’s episode, but at no point will Quinn apologize to Katie for exposing Bill and Brooke’s kiss.

Who knows, Katie may not even want her to apologize at this point, and it would be a good thing if she doesn’t, because Quinn is going to remain completely unrepentant. But Katie might blast Quinn over the very public way that she chose to expose Bill and Brooke.

It sounds like a lot of B&B drama is heating up for Thursday’s episode, so stay tuned! Remember that CDL is your place for all the latest Bold and the Beautiful updates. We’ll keep you posted on the hot spoilers, daily recaps, and B&B news.