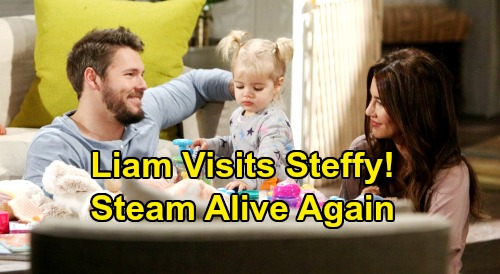 The Bold and the Beautiful (B&B) spoilers tease that Liam Spencer (Scott Clifton) and Steffy Forrester (Jacqueline MacInnes Wood) will be back on the scene soon. B&B fans can expect to see some “Steam” bonding within the next two weeks, so it’ll be interesting to see what Steffy and Liam talk about.

After spending some time with Kelly Spencer (Avalon and Colette Gray) together, it looks like Kelly will go down for a nap while Mom and Dad catch up. There may be a lot to go over!

Steffy might open up about Ridge Forrester’s (Thorsten Kaye) relationship drama. She’ll naturally be concerned about her dad and what the future holds with Brooke Forrester (Katherine Kelly Lang).

Of course, Steffy could also talk about Sally Spectra (Courtney Hope) and her grim fate. Sally’s story will be taking center stage during this timeframe, so that might be something Liam weighs in on.

However, Liam and Steffy’s upcoming scenes could also set up something new – like Thomas Forrester’s (Matthew Atkinson) return to the action.

Regardless, Thomas isn’t going to sit back and watch “Lope” raise his son. Douglas Forrester (Henry Joseph Samiri) will be a huge part of this next story phase, especially since he’s poised to take a dark turn of his own based on other Bold and the Beautiful spoilers.

No matter what Liam and Steffy discuss, their connection will remain strong. Is this B&B’s way of keeping the “Steam” dream alive? Liam seems all in on his future with Hope for now, but it could be significant that they’re keeping Steffy and Liam on such good terms.

After all, Liam could’ve held a grudge over Steffy’s role in Thomas’ plan, which brought the kiss Hope witnessed.

It looks like that’ll be completely forgotten by the time Steffy and Liam talk on Steffy’s sofa. They’ll confide in each other and settle back into old patterns, which could set up some trouble later on. We all know Liam’s a flip-flopper, so all this Steffy bonding at least provides some hope for “Steam” – like it or not!