The Bold and the Beautiful Spoilers: Shocking Death Update, Beloved Character’s Exit On – Everything We Know About Sad Sendoff

BY Heather Hughes on May 1, 2020 | Comments: Leave Comments
Related : Soap Opera, Spoiler, Television, The Bold and the Beautiful 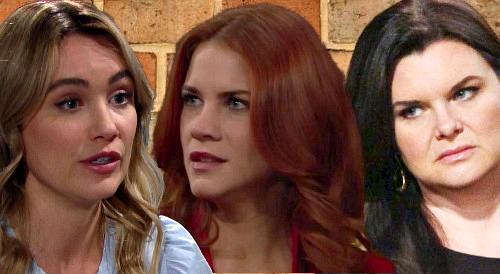 The Bold and the Beautiful (B&B) spoilers reveal that now’s a good time for an update on the shocking death that’s set to hit the CBS soap. Back in December 2019, Executive Producer and Head Writer Bradley Bell confirmed the bombshell in a 2020 preview interview. Bell told Soap Opera Digest that a “beloved character” would be killed off, so fans have been speculating ever since.

Of course, production has been suspended due to the COVID-19 aka coronavirus crisis. The Bold and the Beautiful cast and crew can’t film new episodes until the pandemic’s under control, so B&B viewers are currently being treated to classic shows.

Since there’s going to be a long stretch without taping, that could change Bell’s timeframe for when this beloved character will bite the dust. It’s possible B&B’s deadly shocker will get pushed back to 2021.

However, this downtime gives us an opportunity to reflect on what’s happened since that interview was given. It allows us to narrow down the options a bit more as we work to solve the mystery.

For starters, we should talk about Sally Spectra (Courtney Hope). When Sally was suddenly diagnosed with a terminal illness, many Bold and the Beautiful fans expected she’d be the one to die. Now that we know Sally’s faking it, we can probably take her off the fatality list.

Naturally, we can’t rule out some cruel twist of fate that leaves Sally dead, but it makes more sense to keep Sally alive. If they were going to kill Sally off, they probably would’ve just kept the terminal illness story legit.

Flo Fulton (Katrina Bowden) was clearly unconscious during her last scene before the hiatus, so she can probably put aside, too. If Flo were going to die, B&B would’ve gone for the shock of Dr. Penny Escobar (Monica Ruiz) killing her right in the beach house. Flo arguably couldn’t be considered a beloved character anyway.

There’s also Thomas Forrester (Matthew Atkinson), who many fans feared might meet a grim fate. Sometimes that happens with characters that sink to a dark place – and Thomas definitely did! Nevertheless, Thomas seems poised to turn things around now.

He’s at least going to try, so The Bold and the Beautiful has bypassed their reasonable window for killing Thomas off.

Shauna Fulton (Denise Richards) has confirmed that she’s sticking around, so we shouldn’t worry about Flo’s mom either. Penny could be in jeopardy, but she’s not beloved. Fans don’t really know Penny well enough to care.

As for the main staples of B&B like Liam Spencer (Scott Clifton), Hope Logan (Annika Noelle) and Steffy Forrester (Jacqueline MacInnes Wood) and more, they’re obviously not going anywhere. The “biggies” are going to be just fine, but supporting characters could be in trouble.

Now you might be wondering if The Bold and the Beautiful might’ve scrapped this plan entirely. That’s a possibility to consider, but a recent blind item from SOD suggests the plan’s still on. They confirmed that one soap has a deadly sendoff in mind for one of its players.

General Hospital is an option, but so is The Bold and the Beautiful – especially since a deadly departure was already promised. This blind item just backs it up.

Regardless, it’s nice to have more info as we prepare for the return of new episodes. There’s no word yet on when that’ll happen, but we’ll pass along updates as other news comes in.