The Bold and the Beautiful Spoilers: Steffy Comes Clean About The Kiss – Liam Blames Thomas, Then Proposes Marriage?

BY hellodrdavis on March 3, 2020 | Comments: 2 comments
Related : Soap Opera, Spoiler, Television, The Bold and the Beautiful 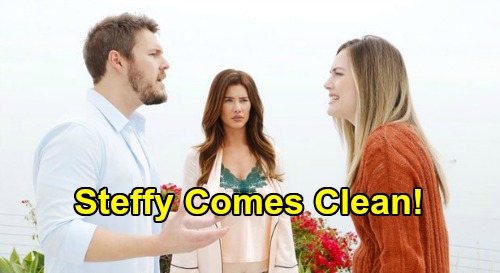 The Bold and the Beautiful (B&B) spoilers tease that Steffy Forrester (Jacqueline MacInnes Wood) will have a big decision to make. As B&B viewers know, she recently kissed Liam Spencer (Scott Clifton) and Hope Logan (Annika Noelle) saw the whole thing. It led Hope to promptly break off her relationship with Liam, so it was a pretty big deal.

Well, as it turned out, Steffy didn’t just spontaneously kiss Liam. It was a staged event, orchestrated by Thomas Forrester (Matthew Atkinson) in order to drive a wedge between Hope and Liam, with the end goal of getting Hope all to himself.

Steffy got manipulated big time by Thomas, thinking that Thomas was only looking out for her best interest in helping her hold onto Liam for Kelly Spencer’s (Collette and Avalon Carlish) sake.

The Bold and the Beautiful spoilers say that Steffy will soon find out in a very hurtful way that Thomas’ overarching plan is to manipulate people so that he can get Hope, and that her kiss with Liam was all part of that plan.

Specifically, Steffy will overhear Thomas talking, and she’ll get an earful of what was really going on when Thomas roped her into that kiss. She’ll be furious, and she’ll realize that she needs to tell Liam the truth.

But how’s Liam going to react to that news? He’ll probably be shocked at first, although when he gives it a little more thought, he probably won’t be surprised that Thomas would concoct such a plan.

And given how well Liam knows Steffy, he might not be outraged with her at all, especially when she explains how she got sucked into the plan. After all, Thomas did appeal to her sense of wanting Liam back as a full-time dad to Kelly, which is a pull that any mother in her situation may want.

In fact, Liam could end up really feeling for Steffy in this situation. He might realize that Steffy’s desire to have him back, and to have him be there for Kelly, is stronger than he thought.

Liam seems to be pulled in the direction of a woman by the least little thing, he could actually decide that he wants Steffy all over again because of this! In other words, Thomas’ plan could end up having the desired effect, even after his deception is revealed.

After all, it doesn’t seem like Hope is going to give Liam the time of day anytime soon, even if she finds out that the kiss that Steffy and Liam shared was manipulated.

For Hope, the fact will probably remain that Liam kissed Steffy back – which is something that most definitely was not manipulated by anyone. Given this bleak reality, Liam might just decide that his future is with Steffy.

So, could “Steam” live again, even after the kiss deception is revealed? We think there’s a good chance that Steffy and Liam could get together despite Steffy’s participation in Thomas’ plan.

Who knows, Liam could even propose to Steffy! Stranger things have certainly happened, and Liam is a classic waffler, so perhaps we’ll see a Steam proposal take place.

What do you think? Will Steam get back together despite Steffy’s role in Thomas’ manipulative plan? Keep watching the Bold and the Beautiful, and be sure to check CDL often for the latest B&B news, updates, and spoilers.