The Bold and the Beautiful Spoilers: Steffy Sends Zoe To Find New Man – Thomas and Carter Fight For Her Love?

BY Heather Hughes on March 28, 2020 | Comments: one comment
Related : Soap Opera, Spoiler, Television, The Bold and the Beautiful 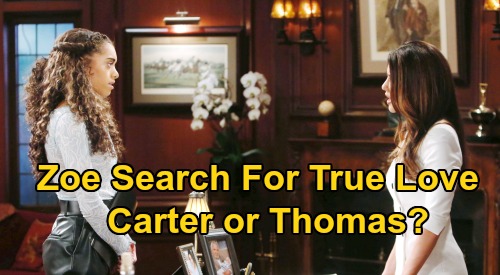 The Bold and the Beautiful (B&B) spoilers tease that Zoe Buckingham (Kiara Barnes) will pop up again after taking some time to reflect on all that wedding drama. Those nuptials were really something thanks to Thomas Forrester’s (Matthew Atkinson) exposure. Hope Logan (Annika Noelle) made it crystal clear that Thomas would never have her and humiliated him in the process.

Unfortunately, Thomas’ exposure also meant that the naysayers were right about his interest in Zoe. The groom wanted Hope as his bride all along, so Zoe’s been off accepting this outcome and trying heal.

It’s going to be a long and slow process, but Zoe’s a resilient gal. Steffy Forrester (Jacqueline MacInnes Wood) will likely remind Zoe of that during their upcoming chat.

The week of March 30-April 3 will bring a heartfelt conversation between Steffy and Zoe. Thomas’ behavior certainly isn’t Steffy’s fault, but The Bold and the Beautiful spoilers say Steffy will still feel bad about how it all went down.

If Steffy and Liam Spencer (Scott Clifton) hadn’t roped Zoe into their initial plan, perhaps Zoe could’ve stayed out of this entirely.

Plus, Steffy let herself be manipulated by Thomas, who orchestrated the “Steam” kiss that Hope witnessed. Zoe and Steffy may commiserate about wanting to hope for the best when it came to Thomas. They both tried to see the good in this bad boy, but they got burned in the end.

Even so, Steffy and Zoe may be on the same page about Thomas being a disturbed individual who needs serious help. If Thomas can get that help, there’s hope for him to move beyond his Hope obsession and live a normal life, possibly with Zoe.

That’s something that would take time, hard work and possibly medication, but Thomas could truly reform if he sets his mind to it.

Steffy might point out that Zoe could have her own bright, Thomas-less future. Now that Zoe’s free from a relationship that was just for show, she can move on with someone who actually cares about her – perhaps someone like Carter Walton (Lawrence Saint-Victor). A love triangle could form if Both Carter and Thomas vie for Zoe’s love.

Steffy may not get into specifics or suggestions, but she’ll indeed be hopeful about what the future holds for Zoe. That may include Zoe’s career as well. Whatever the case, many B&B fans would like to see more friendships on The Bold and the Beautiful. Maybe Steffy and Zoe could have one of those thanks to the Thomas aftermath bringing them together.

As other B&B news rolls in, don’t forget to stop by regularly for updates. Are you rooting for Zoe and Carter to find love? Do you think Thomas can ever truly change? CDL’s the place to be for exciting Bold and the Beautiful spoilers, updates and news.