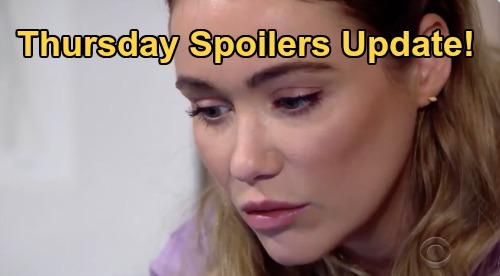 The Bold and the Beautiful (B&B) spoilers update for Thursday, April 16, teases that Flo Fulton (Katrina Bowden) will get sneaky to prove her hunch. Although Flo doesn’t know all the details, she can tell something’s up with Sally Spectra (Courtney Hope). Flo suspects Sally’s motives may be less than pure, so she’ll take steps to prove it in Thursday’s B&B episode.

Sally tried to kiss Wyatt Spencer (Darin Brooks) and insisted treatment was only worth it if he’d reunite with her. Flo thought Sally’s emotional blackmail plot was way over the top.

Now that Sally’s been told she needs to move out, Flo’s not buying her latest act. Sally’s struggling to hide her disdain for Flo despite the grateful comments, so Flo really feels like she’s onto something.

The Bold and the Beautiful spoilers say Flo will head back to Dr. Penny Escobar’s (Monica Ruiz) office. Although Dr. Escobar hasn’t been very helpful so far, Flo will be more determined this time. She may think if she grills the doc hard enough, she can get some firm answers.

However, Flo will ultimately find a much more reliable source of info. Flo will manage to get on Dr. Escobar’s laptop, which means she can sneak a glimpse of Sally’s medical records. The Bold and the Beautiful spoilers say Flo’s in for a shock! She should see enough to realize Sally’s faking this whole terminal illness.

Flo won’t be able take the proof with her, so she’ll have to get creative with her next step. It won’t be long until Flo corners Sally and tries to trick her into confessing.

With that in mind, Quinn simply won’t offer one. She may remind Katie that she did her a huge favor by showing Bill and Brooke’s true colors. Katie should agree on some level, although she would’ve preferred a less public exposure. Quinn caused a real spectacle, so she may still get an earful over the video scandal.