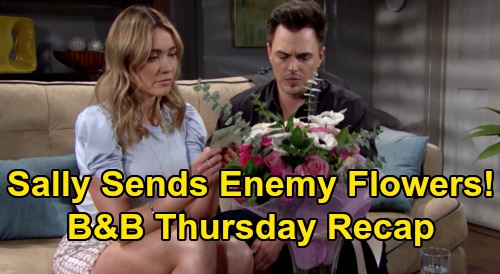 The Bold and the Beautiful spoilers recap for Thursday, April 2, reveal that Wyatt Spencer (Darin Brooks) prepared to leave the beach house while on the phone with Flo Fulton (Katrina Bowden). Wyatt updated Flo about how Sally Spectra (Courtney Hope) was getting used to her walker, and he told Flo he missed her as Sally eavesdropped from the bedroom and applied makeup in order to look extra pale.

Sally walked in the room aided by her walker, and Wyatt commented that she looked pale. Sally told Wyatt that he should go, and that she’d be fine, then she jumped and cried out, “Snake! There’s a snake!”

Wyatt quickly figured out that Sally had mistook the lamp cord for a snake, and Sally calmed down, then told Wyatt that she was thankful to him and Flo.

Sally went on about how kind Flo had been to her, and that it had made her realize that she wanted to spend the rest of her life with Wyatt. Wyatt looked uncomfortable, and Sally urged him to go meet with Flo.

Sally asked Wyatt to thank Flo for her, and Wyatt promised to do so. Wyatt and Sally hugged, and Wyatt took off. To herself, Sally said, “What I really want is for you to tell her it’s over.”

Meanwhile, over at Flo’s apartment, Zoe Buckingham (Kiara Barnes) stopped by to say that she heard about Sally’s diagnosis. Zoe wondered what was going on with Sally living with Wyatt again. Flo explained that she and Wyatt didn’t want Sally to be alone in her last few weeks, and that she encouraged Wyatt to be with Sally during this time.

Zoe thought that was awfully generous of Flo, and she questioned whether there were still feelings between Sally and Wyatt. Flo said that she wasn’t worried, and that a tragedy like this puts everything in perspective.

Flo said that she had talked with Sally and that Sally understands that Wyatt is there for her as a friend. Zoe thought that Sally must have been shocked to learn that Flo and Wyatt were back together.

Flo stated that Sally’s needs needed to come first right now, and that she deserved a few weeks of being totally content and happy, but that under any other circumstance, Flo wouldn’t be happy with Wyatt and Sally living together. Wyatt then walked in and greeted Flo and Zoe, and Zoe soon took off.

Once alone, Wyatt and Flo kissed on the couch and Wyatt wondered if he should feel guilty about this. Flo pointed out that it wasn’t like they were sneaking around, and Wyatt disclosed that Sally knew they were going to be together today and that she was upset by it.

Soon, someone knocked at the door, and Flo received flowers. Flo thought they were from Wyatt, but they were actually from Sally.

The card on the flowers read, “I didn’t know such goodness existed in the world – thank you for giving me the gift of time with Wyatt.” Flo noted that Sally’s situation was so unfair, and she said that she wanted to go see Dr. Penny Escobar (Monica Ruiz), to convince Dr. Escobar to get Sally to find new treatments to fight her disease.

Back at the beach house, Sally was alone when Penny showed up. Penny immediately insisted that Sally tell Wyatt the truth. Penny balked when she saw Sally’s walker, and Sally insisted that her plan would work. Penny and Sally argued back and forth for a while, rehashing the plan for Penny to help Sally so that Sally would help her break into the fashion business.

Through their conversation, it was established that Sally hates Flo for stealing Wyatt from her, and that it was pure luck that Katie Logan (Heather Tom) showed up at Sally’s doctor’s appointment that day.

Sally said that she just knew that blabbermouth Katie would spill her “diagnosis” to Wyatt, and that she did. Sally blasted Flo, calling her arrogant and a baby thief who has made her life miserable.

Flo disclosed to Penny that she had sent Sally flowers because you can’t come straight at someone like Flo. Sally continued that she was sure that Flo would eventually be blindsided when Wyatt dumps her.

Penny protested, saying that she couldn’t live like this, and that keeping the secret is killing her. Sally told Penny to hold tight, and that if she cracks, then they’ll both be in huge trouble.

There’s a lot of B&B drama heating up, so stay tuned! Keep on reading CDL regularly for all the latest soap news and updates. We’ll keep you informed on the hottest new Bold and the Beautiful spoilers as we hear them!