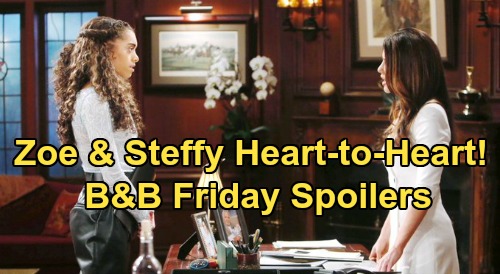 The Bold and the Beautiful spoilers for Friday, April 3, tease that Flo Fulton (Katrina Bowden) will pay Dr. Penny Escobar (Monica Ruiz) a visit at the hospital. As B&B viewers know, Flo and Wyatt Spencer (Darin Brooks) are still very much under the impression that Sally Spectra (Courtney Hope) is terminally ill. They don’t yet realize that Sally is faking the whole thing in order to win Wyatt back.

As Sally recently explained to Dr. Escobar, she’s not only out to get Wyatt back, but she’s out to win against Flo. Sally detests Flo for waltzing in and stealing Wyatt from her twice. Sally’s plan is to prove to Wyatt just how great the two of them are together, pretend to seek treatment with Dr. Escobar’s help, then suddenly be “cured” and live happily ever after with Wyatt.

Well, Flo’s move in going to see Dr. Escobar on Friday’s episode could be the beginning of Sally’s undoing. As B&B viewers know, Flo wants to talk with Dr. Escobar about the specifics of Sally’s illness, in order to get Dr. Escobar to see that Sally is a fighter and that she may need to be pushed a bit in order get her fighting spirit back. Flo really wants Sally to survive, and she’ll hope that she can get Dr. Escobar to nudge Sally to seek some alternate forms of treatment.

But given that Dr. Escobar is already jumpy about the whole fake illness ruse, Flo’s visit is probably going to make her pretty nervous. It looks like she’ll squirm as Flo peppers her with questions about Sally and her illness. Of course, Dr. Escobar can’t really divulge sensitive patient information with Flo, so she’ll be protected in that way, but still it looks like Flo will pick up on Dr. Escobar’s nervous demeanor.

Meanwhile, on the new episode of B&B on Friday, April 3, Zoe Buckingham (Kiara Barnes) will get settled back into her work at Forrester Creations. Zoe has been through a lot in the past several days, considering the wedding fiasco she went through with Thomas Forrester (Matthew Atkinson). But B&B spoilers say that Zoe will be back to work on the fall collections with Steffy Forrester (Jacqueline MacInnes Wood).

It looks like Zoe and Steffy will have a heart-to-heart as they’re together on Friday’s episode. Zoe will probably be grateful to Steffy for keeping her on at Forrester Creations even though Thomas is now missing in action. The ladies will also discuss what’s going on in the lives of Wyatt, Sally, and Flo. As B&B viewers will remember, Zoe has recently visited with Flo and she got updates on Wyatt and Sally’s current living situation.

Zoe will probably pass along updates to Steffy about the whole thing. Of course, Steffy knew about Sally’s alleged terminal condition from Katie Logan (Heather Tom), and B&B viewers will remember that Steffy and Ridge Forrester (Thorsten Kaye) surprised Sally with the news that variations of her designs would be included in Forrester’s next couture collection.

At any rate, it will be good to see Zoe and Steffy back to work per usual after all of the drama that they’ve both faced in recent days. Stay tuned to the CBS soap and we’ll be sure to keep you in the loop as more B&B news comes in. Remember, CDL is your place for the latest Bold and the Beautiful spoilers, recaps, and updates – stick with us for all your soap news!

UPDATE: B&B has announced that Friday’s will be reserved for classic encore episodes starting April 3 – so this spoilers post is valid for Monday, April 6 new Bold and the Beautiful episode!