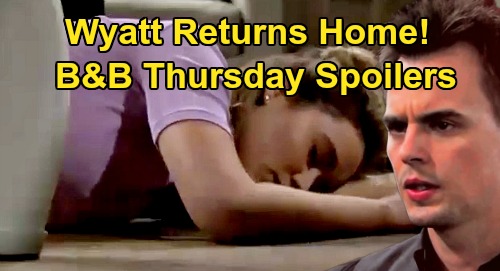 The Bold and the Beautiful spoilers for Thursday, April 23, tease that Sally Spectra (Courtney Hope) will be horrified at what’s just happened at the beach house. As B&B viewers know, Flo Fulton (Katrina Bowden) was on her phone, texting Wyatt Spencer (Darin Brooks), when Dr. Penny Escobar (Monica Ruiz) struck, totally bashing Flo over the head with a candle pedestal.

This came after Flo had threatened to tell Wyatt everything and see to it that Penny lost her medical license. Something had to be done, and Sally was begging Flo to keep her mouth shut, but Penny was the one to take action. Now Sally is stunned and desperately worried about what’s just gone down. Flo’s just a heap on the floor!

Meanwhile, over at Spencer Publications, Wyatt and Bill Spencer (Don Diamont) will be continuing their conversation about the situation with Flo and Sally. As B&B viewers know, Wyatt has been feeling terribly guilty about asking Sally to move out of the beach house.

Of course, Wyatt’s not planning to put Sally out on the street; rather, he wants to get her set up in an appropriate medical facility, but Wyatt feels pretty guilty about it.

Fortunately, Bill is there to tell Wyatt not to feel guilty and that he’s doing the right thing. It’s good that someone is showing some compassion for Wyatt and what he’s going through, especially since Katie Logan (Heather Tom) and Quinn Forrester (Rena Sofer) seemed to come down on the side of Sally staying put.

Wyatt’s just afraid of Sally spiraling into ill health and he wants to make sure she’s cared for.

But of course, neither Wyatt nor Bill know at this point that Sally’s whole illness is a sham. And while Sally’s over at the beach house tending to an unconscious Flo and worrying about what Penny might do next, Wyatt and Bill will keep talking away, with their discussion turning to their regrets over how they’ve hurt Katie and Sally.

It looks like Wyatt will chide his dad a bit over his kiss with Brooke Forrester (Katherine Kelly Lang) during the exchange.

It also appears that Bill will head over to Forrester Creations to talk with Katie and to try to get her to realize how sorry he is over the kiss with Brooke.

Unfortunately for Bill, B&B spoilers say that Katie won’t be ready to hear Bill’s apology just yet, as things will still be pretty raw for her. At this point, Katie probably doesn’t know whether Bill is really sorry for the kiss or simply sorry that he got caught!

But back to the drama unfolding over at the beach house…it looks like Sally and Penny will try to figure out what they’re going to do next. They’re in a real predicament, given that Wyatt will be returning soon.

But what’s going to come next? Obviously, Penny is a dangerous wild card at this point who could lash out and harm Sally as well…or even Wyatt when he returns!

Chances are, he’ll fumble at the door for a few seconds for dramatic purposes. Will Sally and Penny quickly move Flo to the bedroom and try to pretend that everything’s ok?

We should note that Thursday’s episode will be the last new episode that B&B will air for the foreseeable future due to the COVID-19 shutdown. We could see a major cliffhanger here as Wyatt walks through that door.

But what will Wyatt find when he does? Will Penny be inclined to strike him, too? And if she does, would Sally be able to stop her?

It sounds like a lot of action is in store for Thursday’s episode, so be sure to tune in! We’ll be sure to let you know as we hear more B&B news. Remember that CDL is your go-to place for all the latest Bold and the Beautiful spoilers and daily recaps.