The Bold and the Beautiful Spoilers: Thursday, February 13 Recap – Wyatt’s Surprise Offer To Sally – Thomas Turns The Tables On Hope 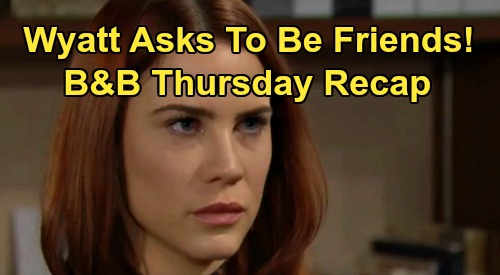 They then proceeded to argue over familiar territory, with Brooke berating Thomas and saying that he needs professional help, and that Ridge needs to open his eyes. Ridge asked Brooke to try to step away from her anger and judgment, and Brooke then admitted that she had a moment of weakness and wanted to take a drink…because of Thomas.

Ridge said that he didn’t want her going back down that path and that he didn’t want them arguing. He begged her to end the conflict, and Brooke fired back that he was the one who had lost faith and turned to Shauna Fulton (Denise Richards). Ridge said that he only wanted Brooke, but that his son would be a part of his life forever and that they had to find a way to make this work.

Meanwhile, at Spencer Publications, Wyatt Spencer (Darin Brooks) reeled from the news of Sally Spectra’s (Courtney Hope) terminal diagnosis. He decided he needed to go see her, but Katie Logan (Heather Tom) informed him that Sally didn’t want him to know, so he had to keep his knowledge of her condition a secret. Ultimately, Wyatt left to go see Sally, much to Katie and Bill Spencer’s (Don Diamont) displeasure.

In the Forrester Creations design office, Sally sat trying to work while Quinn Forrester (Rena Sofer) worked nearby. Quinn notice that Sally seemed unusually distracted and wondered if everything was ok. She noted that they hadn’t always gotten along, but that she understood that it was a difficult time for Sally. Sally was quiet as Quinn said that she saw good things on Sally’s horizon and that she’d bounce back from the breakup.

Later, Sally was alone and trying to sketch but was having problems with her hands. Wyatt quietly opened the door and saw Sally struggling, then left and came back in loudly so that Sally would hear. He said that he was just in the area and thought he’d come by, trying to be nice. Through conversation, he let it be known that Sally could tell him if anything is going on, and he said that he wanted to be sure that they were able to talk with each other still,

Sally was mostly silent as Wyatt said that he still cared about her, and that hoped she would consider him to be a friend, since they started out as friends. He then referenced the time that they met at Bikini Bar when she came back to town and they smiled at the memory. He let her

know that if she needed a friend, she had one in him, but he didn’t reveal that he knew about her diagnosis.

Next, in the Forrester backstage area, Douglas Forrester (Henry Joseph Samiri) asked Hope Logan (Annika Noelle) why his Daddy was kissing Zoe. He said that he didn’t want another Mommy, and Hope did her best to reassure him. Across the way, Vinny Walker (Joe LoCicero) asked Thomas what he was doing, and Thomas said it was the only way to get what he wanted, and that Douglas had to be the one to convince Hope to come back to them.

Thomas then pretended to sense that Hope wanted to talk with him, and he sent Zoe and Douglas upstairs. Hope immediately confronted Thomas about confusing Douglas with his public display of affection toward Zoe. Thomas pretended to be upset by the fact that he had “inadvertently” upset Douglas.

Thomas then innocently stated that he was with Zoe and that it was natural for him to kiss her. Hope fired back that he shouldn’t do that in front of Douglas, and that they’re a family and they should discuss things like that. Thomas said that they weren’t really a family, and if they were being honest, then that’s why Douglas was upset. This seemed to rattle Hope.

Thomas then said that Hope needed to tell him something before he goes any further with Zoe. He asked Hope whether the future Douglas dreams about could ever be a reality for the three of them. Hope simply stared, not knowing what to say.

Stay tuned to the Bold and the Beautiful on CBS, as more action is heating up. And stick with CDL for all of your B&&B updates, news, and spoilers.