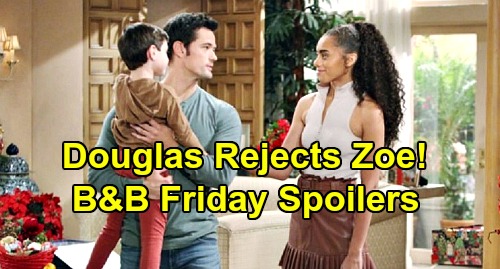 The Bold and the Beautiful spoilers for Friday, February 14, tease that Sally Spectra (Courtney Hope) will start to worry Katie Logan (Heather Tom). As B&B viewers know, Sally is still reeling from her devastating terminal diagnosis. Not only is she continuing to suffer from horrible physical symptoms that are interfering with her work and daily routine, but she’s keeping the diagnosis a secret from the people who care about her the most.

Sally refuses to call her grandmother Shirley Spectra (Patrika Darbo) or the rest of her family, and she absolutely doesn’t want Wyatt Spencer (Darin Brooks) to know what she’s going through. Of course, B&B viewers know that Katie did ultimately tell Wyatt about Sally’s diagnosis, but for now it looks like he’ll keep his knowledge of Sally’s condition to himself. And so going forward, Sally’s main confidante will likely continue to be Katie.

Well, on Friday’s episode, Sally will inform Katie that she intends to refuse treatment for her illness. Dr. Escobar (Monica Ruiz) had previously mentioned that she’d like to get Sally on a regimen of drugs to keep her comfortable as her condition progressed, and there was talk about palliative care. However, according to B&B spoilers, Sally will decide that she wants to refuse treatment and let her illness take its course.

This obviously won’t sit well with Katie, who will urge Sally that she needs to take care of herself and to fight. After all, with a positive fighting spirit, it’s possible that she could actually live longer than the month she’s been projected to live. Katie will try to talk with Sally about this, but will she ultimately listen to her friend?

Meanwhile, on the new episode of B&B on Friday, February 14, Zoe Buckingham (Kiara Barnes) and Douglas Forrester (Henry Joseph Samiri) will spend a little time together, and it looks like it will be a bit awkward. As B&B viewers know, Hope Logan (Annika Noelle) and Thomas Forrester (Matthew Atkinson) are in the middle of a big private discussion in the backstage area at Forrester Creations.

Thomas asked Zoe to take Douglas and watch over him for a while, and it looks like she’ll try to bond with him and make nice, but Douglas won’t be having it. Of course, Douglas is a sweet little kid and he won’t be deliberately unkind or malicious, but he’ll probably be honest about the fact that he’d much rather be spending time with his Mommy Hope.

Who knows, Douglas might also quiz Zoe about why she was kissing his Daddy, and he might state outright that he doesn’t want her to be his new mommy. Again, he probably wouldn’t say this to hurt Zoe, but he’s really confused right now about what’s going on between Thomas and Zoe, and between Thomas and Hope.

Meanwhile, in the backstage area, Hope and Thomas will continue their conversation, and as B&B viewers know, Thomas just put Hope on the spot and asked her if there was any chance that they could ever be a family with Douglas. Chances are, Hope will respond in the negative, given that ongoing spoilers say that Thomas will up the ante by actually proposing to Zoe.

It’s going to be interesting to see how this all works out. Clearly, Hope is conflicted at some personal level by Thomas’ relationship with Zoe, and she probably doesn’t understand what she’s feeling at this point. Chances are, there’s some jealousy there, and she’ll have to come to terms with that at some point.

We’re in for a great B&B episode on Friday, so be sure to tune in! Don’t forget that CDL is your place for the latest Bold and the Beautiful information and spoilers.