BY Heather Hughes on February 20, 2020 | Comments: one comment
Related : Soap Opera, Spoiler, Television, The Bold and the Beautiful 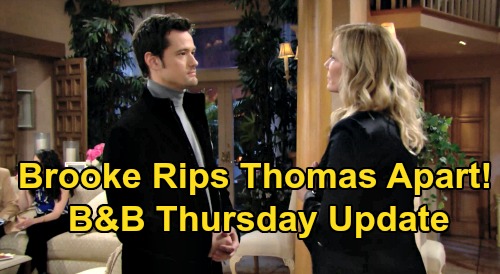 The Bold and the Beautiful (B&B) spoilers update for Thursday, February 20, teases that Thomas Forrester (Matthew Atkinson) will move forward with his dinner party plans. He’s hoping this night will be a real game-changer when it comes to his future. Thomas knows this will be a difficult experience for Douglas Forrester (Henry Joseph Samiri), but he’s willing to do it anyway. No pain, no gain!

In fact, Douglas’ pain is at the center of Thomas’ latest plot, which involves popping the question. The Bold and the Beautiful spoilers say Thomas will have it all planned out. He’s a very strategic guy, so he’ll hope every step of his plan works like a charm.

Of course, there’ll be some bumps in the road, but Thomas probably expected those – especially from Brooke Forrester (Katherine Kelly Lang).

Brooke will attend this gathering, but she won’t approve of Thomas’ romantic display. It might be different if Thomas were actually invested in his relationship with Zoe Buckingham (Kiara Barnes), but he isn’t.

Brooke will scoff over Thomas playing things up and acting like Zoe’s so special to him. She’ll call Thomas out for his double manipulation: he’s using Zoe to try and get Hope Logan (Annika Noelle) back.

The Bold and the Beautiful, updates and news spoilers say Thomas will deny, deny deny… He’ll once again act like he’s moved on and is building something great with Zoe.

Ridge Forrester (Thorsten Kaye) will think Brooke needs to be a little more supportive here. He’ll want Brooke to see that Thomas is making an effort, but Brooke naturally won’t buy that at all.

B&B fans can expect Thomas to make a flowery speech that’s probably full of platitudes. He’ll want everyone to think he’s really been swept up in this amazing new love story – one he wants to last forever.

The Bold and the Beautiful spoilers say this is all leading up to Thomas’ grand proposal. He’ll ask Zoe to marry him, which will leave poor Douglas freaking out. He already feared Hope would be replaced, so this is only going to add to those worries.

Hope will be unsettled by Thomas’ rushed question-popping and Douglas’ ensuing outburst. She’ll definitely be overwhelmed by this stunning turn of events.

It sounds like some exciting scenes are on the way. We’ll pass along the latest news as more B&B updates roll in. Stick with CDL for Bold and the Beautiful spoilers and plenty of hot shockers.