The Bold and the Beautiful Spoilers: Bill & Flo Bond While Wyatt’s Busy with Sally – Another Cheating Scandal Brewing? 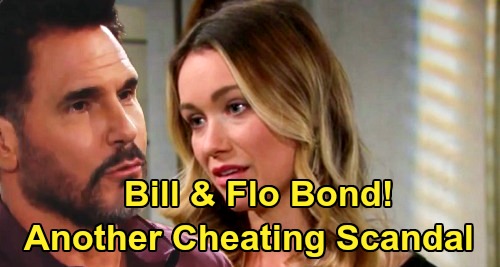 The Bold and the Beautiful (B&B) spoilers tease that Flo Fulton (Katrina Bowden) will focus on doing the right thing. She’ll push Wyatt Spencer (Darin Brooks) to be all about Sally Spectra (Courtney Hope) during this difficult time. Since Sally won’t be alive much longer – at least according to her doctors – Flo will give Wyatt more encouragement and hope he knows she’s fine with this.

Of course, Flo could end up regretting this decision if Sally beats the odds and Wyatt falls back in love with her. For now, let’s focus on the praise Flo will receive. Wyatt will think Flo’s an incredible woman for being so selfless. He’ll truly appreciate Flo’s support – and it looks like Wyatt’s dad will, too.

The Bold and the Beautiful spoilers say Bill have a surprising compliment to pass along. He’ll give this compliment to Flo, who should be grateful. Bill’s had his fair share of issues with both Sally and Flo, but he’s not holding too many grudges these days.

Sally’s dying and Flo gave up a kidney for Katie Logan (Heather Tom), so there’s no reason for Bill to cause problems for them.

That’s especially true when Flo’s being so accommodating to Wyatt and the ex he still cares about. Bill’s compliment may tie in with that, but let’s look closer at this whole scenario.

Katie remains unbelievably grateful to Flo for saving her life and has pushed for forgiveness for Flo within the family. However, we’re seeing Katie head over to Sally’s team now, which is interesting.

Although Katie has some bonding moments with Flo coming up, Sally’s the one Katie’s truly connecting with and growing closer to. Their friendship is deepening, and Katie would certainly like to see Sally beat her illness. She’d probably remain on board with a “Wally” reunion if Sally survived.

What about Bill though? This compliment and sweet exchange with Flo could be the start of his own stronger bond with her. We also know Bill’s not above sleeping with a son’s love interest!

If Sally’s prognosis improves and she’s given more time, that means Flo will be kept waiting. Flo may have to stand by and watch Wyatt fall for Sally all over again. Will Bill be there to pick up the pieces?

The Bold and the Beautiful has had Bill in devoted husband and father mode for a while now. It’s probably about time for Bill to have another screwup, so cheating on Katie with Flo would work.

Whether through a kiss or a hot hookup, it’d be an intriguing story development. Kidney or no kidney, Katie might not be as forgiving after that! The Bold and the Beautiful spoilers, updates and news. say Bill will remain part of this hot plot, so it’ll be interesting to see if anything might happen with Flo.

Do you think B&B might put Flo and Bill together? She’ll need something – or someone – to keep her busy if Wyatt’s focused on Sally for too long! The Bold and the Beautiful spoilers say some exciting drama’s brewing, so stick with CDL for some hot news and updates.