BY hellodrdavis on February 19, 2020 | Comments: 2 comments
Related : Soap Opera, Spoiler, Television, The Bold and the Beautiful 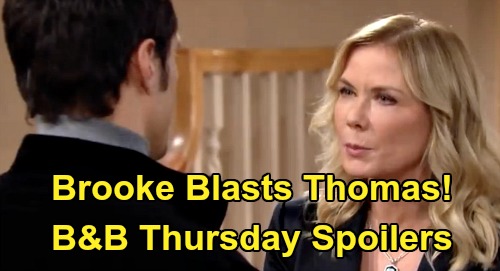 The Bold and the Beautiful spoilers for Thursday, February 20, tease that the Forrester family dinner will get underway. As B&B viewers know, Thomas Forrester (Matthew Atkinson) has planned a dinner, and he’s got all sorts of ulterior motives for doing so. He’s been really working on both Douglas Forrester (Henry Joseph Samiri) and Hope Logan (Annika Noelle) lately, with the hopes that Douglas will eventually convince Hope to want to work things out with him and become a couple.

It’s a long-range plan, but so far Thomas has been pretty successful in inching closer to his end goal. He’s managed to really unnerve Douglas by spending lots of time with Zoe Buckingham (Kiara Barnes) and making sure to fawn over her whenever Douglas is around. That’s led Douglas to run to Hope, telling her that he wants her to be with his Daddy, not Zoe.

This is all causing a lot of internal conflict for Hope, and it’s led her to actually defend Thomas to Liam Spencer (Scott Clifton) and Brooke Forrester (Katherine Kelly Lang) when they’ve noted that Thomas is just using Zoe and Douglas to get to her. Hope is really starting to believe that Thomas is turning things around, and it even seems like she is starting to feel a little jealous of Thomas’ affections toward Zoe.

Well, on Thursday’s new episode of B&B, everyone will gather for the Forrester dinner, and Thomas will be sure to put his relationship with Zoe on full display for everyone to see. It looks like Brooke will be present at the dinner, having been invited by Ridge Forrester (Thorsten Kaye), who still wants to work out their marriage. And that means that Brooke will get an eyeful of Thomas and Zoe together…and she won’t like it one bit.

Of course, Brooke can see right through Thomas and she just knows that he is flaunting his relationship with Zoe in order to ultimately get Hope. And according to B&B spoilers, Brooke will take the opportunity to call Thomas out for what he’s doing, perhaps in a private moment at the dinner party. But that’s not going to deter Thomas one bit, and he’ll continue on with his plan.

As it turns out, his plan will include making the dinner all about his relationship with Zoe, and it will even include a romantic proposal of marriage to her. With the whole family, including Hope, Douglas, and Liam Spencer (Scott Clifton) present, Thomas will formally ask Zoe to marry him. Everyone should be sufficiently stunned by this move, although Brooke and Liam will surely realize exactly what the whole thing is really about.

It should be quite the scene, and we’ll see if Thomas actually gets down on bended knee and whips out a ring to boot. Chances are, he’ll really play the whole thing up for his key audience…Douglas. He’s going to be hoping to really frazzle Douglas, which in turn will frazzle Hope, and that’s the whole point. He’ll want Hope to be faced with the fact that the engagement means deleterious changes for Douglas – changes that she’ll probably decide are too much for the little boy.

Of course, what Thomas really wants is to have the subsequent big conversation with Hope, were he’ll inevitably ask her again whether there’s any chance that they could be together as a family with Douglas down the road. He really wants to force the issue, and his big proposal is how he’s going to make that happen.

It looks like we’re in for some major B&B drama as Thomas proposes to Zoe on Thursday’s episode, so be sure to tune in for the action! We’ll be sure to give you updates as we hear more B&B news. Check back often with CDL for all of the latest Bold and the Beautiful recaps, spoilers, and news.