The Bold and the Beautiful Spoilers: Wyatt Proposes to Sally Again Out of Pity – Dying Ex Torn, Must Choose Between Dignity and Love?

BY Heather Hughes on February 19, 2020 | Comments: one comment
Related : Soap Opera, Spoiler, Television, The Bold and the Beautiful 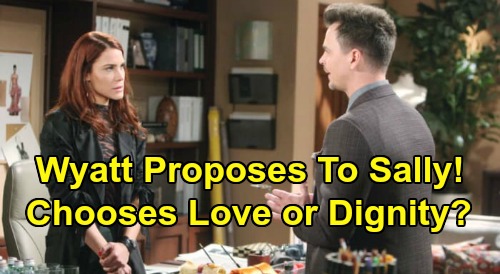 The Bold and the Beautiful (B&B) spoilers tease that Sally Spectra (Courtney Hope) will soon grow suspicious. Wyatt Spencer’s (Darin Brooks) excessively kind behavior and perspective shift should be a huge tipoff. It’ll be easy for Sally to guess that Wyatt might’ve learned some crucial information.

Sally made it crystal clear that she didn’t want anyone to know about her deadly diagnosis, especially Wyatt. She expected Katie Logan (Heather Tom) to keep her mouth shut, but she’ll soon worry that the secret’s out.

During the week of February 24-28, Sally will notice the way Wyatt’s acting and wonder if Katie might’ve blabbed to him. The thought should leave Sally pretty outraged initially.

There’s a good chance Sally will track Katie down soon after and demand some answers, but Wyatt should have a chance to make an offer first. The Bold and the Beautiful spoilers, updates and news say Flo Fulton (Katrina Bowden) will make a sacrifice of compassion for Sally before that offer.

It sounds like Flo will approve a romantic reconnection and try to wait out the rest of this month before Sally’s death. She may even give Wyatt her blessing to marry Sally before she dies. After all, it’s the least Flo can do under such tragic circumstances.

Wyatt should feel the same as he makes a sweet suggestion to Sally. Will that suggestion involve getting their relationship back on track? Will Wyatt propose again and hope he can make Sally’s dreams come true before she fades fast?

Wyatt will likely hope this might prompt Sally to reveal the truth about her condition, but she’ll obviously suspect Wyatt already knows. What will Sally do then? If she confronts Katie, it’s doubtful Katie will lie straight to her face and insist she didn’t spill a thing. That’s just not who Katie typically is when it comes to this kind of thing.

Instead, Katie might admit that she told Wyatt and simply thought it was the right thing to do. She might push Sally to accept that Wyatt wants to help her through this difficult process. Whatever the case, it sounds like Sally will ultimately have a choice to make.

Will Sally choose love over dignity? Will she want Wyatt by any means necessary, even if Wyatt only wants her because she’s dying? It’s kind of sad that B&B’s made it so Sally has to be near death to land the man she wants!

Nevertheless, Sally might decide that she’s dying anyway and opt to savor a little happiness before she goes. Then again, Sally might let her pride take over. She might put up a fight and really make Wyatt work for it.