The Bold and the Beautiful Spoilers: Thursday, February 27 Recap – Katie Bonds With Flo – Wyatt Asks Sally To Live Together 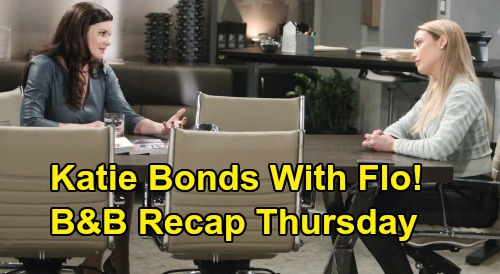 The Bold and the Beautiful spoilers recap for Thursday, February 27, reveal that Wyatt Spencer (Darin Brooks) and Flo Fulton (Katrina Bowden) spoke at Spencer Publications. They talked about Sally Spectra’s (Courtney Hope) plight, and Flo suggested that they put their relationship on hold for a while. Wyatt said that he admired Flo’s compassion, and Flo said that they have a lifetime together ahead of them, but Sally doesn’t have that.

Ultimately, they agreed that Wyatt would ask Sally to move back in with him, and Wyatt wanted to make sure that Flo was ok with that. She said that she was ok with whatever gave Sally happiness and peace. She urged Wyatt to call Sally right now, and he dialed the phone.

Meanwhile, in the Forrester CEO office, Sally told Ridge Forrester (Thorsten Kaye) and Steffy Forrester (Jacqueline MacInnes Wood) that they had given her an incredible gift.

Steffy said that her designs deserve to be in the Forrester couture collection. Katie Logan (Heather Tom) listened outside the door as Ridge told Sally that he was proud of her and that she was a unique talent. He noted that the business was tough, but that they had her back.

Katie then came in, and she pretended to learn the news about Sally’s designs for the first time. Katie was thrilled for Sally. Sally then got a call from Wyatt asking her to meet him at his house. She relayed that she was still on the Forrester payroll and said that she’d tell him her news when she got there.

Sally and Katie left, and Steffy and Ridge decompressed a bit. They remarked that they were glad they didn’t fire Sally, and Steffy noted how Sally had been struggling but came into work every day. Ridge said that she was tough – a Spectra – and that they were going to make sure that Sally’s designs would be a hit in the fashion world.

Back at Spencer Publications, Katie arrived and met up with Flo. Katie relayed that Sally didn’t get fired, which was a great relief to Flo. Katie noted that Flo really seemed concerned about Sally, and Flo said that she was. She wished it was all a big mistake and that the doctors were wrong.

Katie thought that Flo’s decision to step aside was amazing, especially given the past history of competition between them. Flo said that they just wanted to show their support and be there for Sally without her realizing that they know the truth. She also let Katie know that Wyatt was probably asking Sally to move in with him again as they spoke.

At Wyatt’s place, Sally arrived and grimaced in pain, then composed herself before she walked in. Sally looked around the place, clearly remembering better times. Wyatt noted that they had a lot of good memories there, and that he was hoping they’d make more memories to come. He asked Sally to please tell him that she wants the same thing.

Sally then abruptly changed the subject and told Wyatt about her designs being featured in the Forrester Creations new couture collection. She said that all these things were happening at once – first her job, and now Wyatt was saying all these things to her. Wyatt said that he loved her and that he wanted her to move in and live here again.

Sally was stunned as Wyatt went on to say that he wanted to share his life with her. “Tell me you want to be a part of our home again,” he said. Sally cried and hugged him, as Wyatt asked her to spend the rest of her life with him.

It sounds like there’s a lot of action heating up on B&B, so be sure to stay tuned! Stick with the CBS soap and don’t forget to check CDL often for the latest Bold and the Beautiful spoilers, recaps, and news.