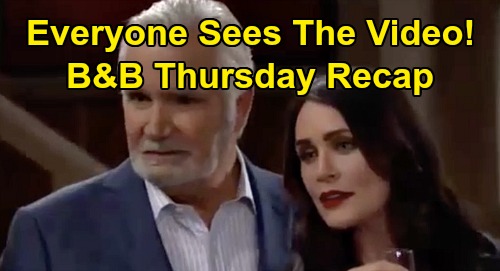 The Bold and the Beautiful spoilers recap for Thursday, March 26, reveal that Donna Logan (Jennifer Gareis) nervously hosted the party at Brooke Forrester’s (Katherine Kelly Lang) mansion. Katie Logan (Heather Tom) pulled Bill Spencer (Don Diamont) aside and asked him to be on his best behavior, which he reluctantly agreed to do. Donna gave Bill a sideways look, and Bill noticed, clearly thinking it was odd.

Bridget Forrester (Ashley Jones) suddenly walked in, announcing that she was in town for a conference and that she wouldn’t miss the reunion party for the world. Ridge Forrester (Thorsten Kaye) said that Brooke will be thrilled to see Bridget, then looked around and wondered where Brooke was.

Meanwhile, over at the Forrester mansion, Quinn Forrester (Rena Sofer) told Brooke that she was destroying her marriage to Ridge all on her own, and that what goes around comes around. Brooke insisted that Ridge wasn’t going to see the video, and that she was going to go home, enjoy her celebration, then tell Ridge the truth.

Brooke left and Quinn smiled to herself. Soon, Eric Forrester (John McCook) walked in and mused to Quinn about how they needed to get ready for the party and that he wanted everyone to get along tonight.

Quinn sweetly said that she was looking forward to the party, and when Eric went upstairs, Quinn called Shauna Fulton (Denise Richards), who was sitting in Flo Fulton’s (Katrina Bowden) apartment thinking about Ridge.

Quinn told Shauna that she was staying in Los Angeles and begged her not to go back to Las Vegas – after all, Ridge would need her soon. Shauna asked if Quinn had told Ridge about Bill and Brooke’s kiss, and Quinn said no. Shauna said that she loved Ridge, and that’s why she couldn’t stay. Shauna hung up.

Back over at Brooke’s mansion, Brooke arrived and joined the party. She happily reunited with Bridget, then Donna took Brooke aside. Brooke told Donna the story about Shauna filming the video and Quinn stealing it and uploading it to the feed. Brooke told Donna that she was going to confess the kiss to Ridge after the party.

Bill then talked privately with Brooke, and he noted that Donna was shooting weird looks in his direction. Brooke hesitated, and Bill deduced that Donna knew about the kiss. Brooke was just telling Bill that Donna had seen them kiss when Quinn and Eric walked in the door and interrupted them.

Quinn walked into the living room and watched happily as Steffy Forrester (Jacqueline MacInnes Wood), Katie, and Ridge looked for the picture frame. Ridge found it in a drawer, and chaos ensued as he tried to figure out how to turn it back on. Quinn noted that it was a great gift, and that she was sure there were things on it they’d all love to see.

Ridge went over to the picture frame and examined it, then got on his phone and hit a reset button on the app on his phone. Suddenly, the picture feed repopulated and he set the frame up on the ledge.

At that moment, Katie offered a lengthy toast, and while she was talking about “Bridge’s” love and commitment, Donna noticed that the picture frame was now scrolling pictures.

Donna panicked and quietly got Brooke’s attention. Brooke looked at the frame, horrified, while Katie finished her toast. Ridge then started a toast of his own, and at that moment the video of Brooke and Bill kissing played out. Steffy said, “What’s that?”

Everyone looked right at the picture frame and saw the video play through. Katie said, “Bill, is that you and Brooke?” Ridge was speechless and said, “Logan?” He then repeated himself as Brooke stood there crying.

That was a riveting episode of B&B, so you’ll want to be sure to tune in tomorrow – we’ve got your spoilers for Friday’s B&B episode, March 27 right here! Remember that CDL is your place for the latest Bold and the Beautiful recaps and updates. We’ll keep you in the loop as more news comes in, so stick with us!