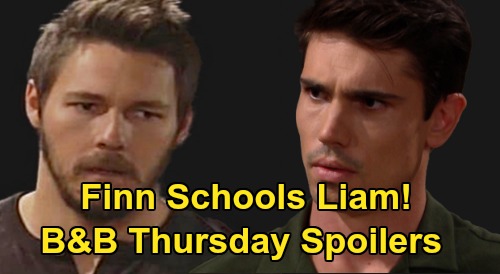 The Bold and the Beautiful spoilers for Thursday, October 15, tease that John “Finn” Finnegan (Tanner Novlan) will have his say in a big way. As B&B viewers know, Liam Spencer (Scott Clifton) has just gone off on Finn, blasting Finn for being the one to reunite Steffy Forrester (Jacqueline MacInnes Wood) and Kelly Spencer (Avalon and Colette Gray) and for circumventing him in the process.

Liam really let Finn have it, telling him that he would always be in the picture, and that Finn should find a new patient to date.

Well, in typical Finn fashion, he stepped back and assessed the situation, letting Liam say his peace. But on Thursday’s episode of the Bold and the Beautiful, Finn will take control of the situation, and he’ll have a few things to say.

Next, Finn will almost surely address Liam’s claim that Finn caused Steffy’s opioid addiction. Finn would do well to point out that Steffy managed to score pills on her own, and that he couldn’t have known in advance that Steffy was going to be one of the percentage of patients who was susceptible to developing an addiction problem.

Finn might also point out Liam’s own contribution to Steffy’s underlying psychological vulnerability that led to her addiction.

Whatever Finn says, it’s apparently going to be pretty forceful. Finn will stand his ground with Liam, and B&B spoilers say that the conversation will mark the beginning of an epic rivalry.

Of course, since Liam is supposed to have all of his romantic and protective feelings focused on his own wife, Finn might point out that Liam would be wise to focus his attentions there. We’ll see how this all shapes out, but Finn’s going to make a strong case for himself.

As B&B viewers know, Carter has just taken Zoe to his new loft, and he’s asked Zoe to move in with him. Zoe looked pretty taken aback, and she’ll have a big decision to make.

It looks like Zoe may ultimately agree to move into the loft, but she might want to have a talk first about exactly where this relationship is headed. The Bold and the Beautiful spoilers say that Carter and Zoe will have a good conversation together, where they explore what they want out of their relationship and about their romantic future.

And given the ongoing B&B spoilers for next week say that Carter and Zoe will end up making love, it seems that Zoe will find herself on board with Carter’s proposal.

It sounds like a lot of B&B drama is heating up for Thursday’s episode, so stay tuned! Keep checking back with us here at CDL for all the latest soap news and spoilers. And check out our daily B&B recaps as well. We’ve got you covered!