The Bold and the Beautiful Spoilers: Thursday, September 17 – Ridge Walks In On A Fight – Finn & Steffy Relationship Sudden Change 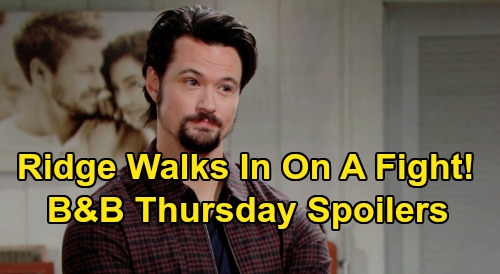 The Bold and the Beautiful spoilers for Thursday, September 17, tease that Liam Spencer (Scott Clifton) and Thomas Forrester (Matthew Atkinson) will continue their tense discussion at Forrester Creations.

Liam had been expressing his concern to Thomas over Steffy and the “weird vibe” he’s been getting from her, when Thomas realized that Liam had crossed a line himself when he went to see Finn at the hospital.

That led Thomas to vent at Liam, and Thomas basically told Liam that he had no right to police Steffy’s relationship with her doctor, since (a) Steffy was a grown woman, and (b) Liam chose Hope Spencer (Annika Noelle) over Steffy.

Well, on Thursday’s episode, it looks like Ridge Forrester (Thorsten Kaye) may walk into the middle of Liam and Thomas’ discussion. B&B spoilers say that Ridge will get an earful from his son and former son-in-law about how Steffy’s doing these days.

Of course, both Liam and Thomas share a concern for Steffy, so they’ll be united on that front, but it seems that when Liam starts squawking once again about Finn, Thomas will lash out in anger.

The good news here is that now Ridge will be apprised of Steffy’s situation. Thomas and Liam are right about their concern over Steffy’s well-being, as B&B viewers know that Steffy has been struggling to cope.

And now that Steffy’s got an illegal stash of pain pills from Vinny Walker (Joe LoCicero), it looks like she’ll be going down the slippery slope of addiction soon.

Meanwhile, on the new episode of B&B on Thursday, September 17, Finn and Steffy will revel in the kiss that they just shared. It looks like Finn and Steffy may talk about where their relationship will head next, now that Finn isn’t Steffy’s doctor, yet they obviously want to spend more time together.

Steffy will need to make arrangements for a new treating physician, and she’ll apparently be ready to make room for a new man in her life.

Of course, this is something that many Steffy fans have been wanting for a long time now, and it looks like we’ll get to see Steffy and Finn sit down and decide what things will look like for them going forward.

Unfortunately, the road is going to be a bit rocky, since B&B spoilers say that Steffy will soon go much farther down the opioid addiction route, but it seems that Finn will be a big part of the solution for Steffy.

In fact, ongoing B&B spoilers say that eventually, Finn, Liam, and Ridge will stage an intervention for Steffy. That means that Finn will be right there to help Steffy through what she needs to go through, and he’ll be part of Steffy’s support system.

That should hopefully lead Steffy and Finn to get closer and forge a long-term relationship together.

Thursday’s episode of B&B sounds terrific, so stay tuned to the NBC soap! Remember, here at CDL, we’re here for you with all the latest Bold and the Beautiful spoilers, daily recaps, and news. We’ve got you covered!