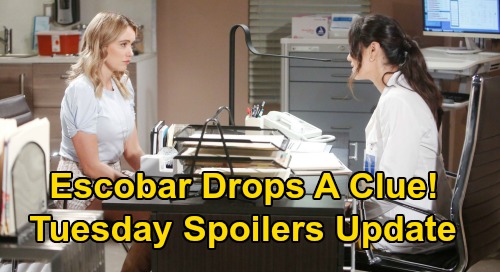 The Bold and the Beautiful (B&B) spoilers update for Tuesday, April 7, teases that Flo Fulton (Katrina Bowden) will discover something surprising in Dr. Penny Escobar’s (Monica Ruiz) office. Dr. Escobar has been stonewalling Flo when it comes to Sally Spectra’s (Courtney Hope) treatment options, but Flo’s starting to feel like there’s more to the story.

Although Dr. Escobar pushed Flo to leave, Flo will stick around long enough to spot a sketchpad. After Flo realizes fashion designs have been sketched on it, she’ll find that pretty strange.

Flo will mention that Sally’s a talented fashion designer who’s made quite a name for herself. When Flo wonders if Dr. Escobar knows anything about Sally’s career, Penny may not have much to say.

Dr. Escobar will likely just keep urging Flo to make her way toward the exit. The sooner Flo heads out, the faster Penny can avoid all these tricky questions! Flo will score an intriguing clue thanks to that sketchpad, but it should take some time for things to click in place. For now, Flo will just be left pondering this bizarre fashion design connection and what it could mean.

Of course, B&B fans know Penny made a deal with Sally. Dr. Escobar’s helping Sally run this terminal illness scam in exchange for help with her fashion career. Sally’s hoping to keep Penny’s mouth shut, but that’s only half the battle.

Sally also has to convince Wyatt Spencer (Darin Brooks) to be her boyfriend again, so she’s using her own treatment as leverage.

On Tuesday, Wyatt will reel as he processes what Sally’s pushing for. Sally just insisted she wants Wyatt back, so she’ll have to elaborate on that. The Bold and the Beautiful spoilers say Sally will want to be a real couple again. It sounds like Sally will want Flo out of the picture completely.

Sally will assure Wyatt that she can find the will to live – but only if he’ll truly be WITH her. It’ll be the only way Sally’s willing to seek treatment. Wyatt may try to talk Sally into compromising on this, but Sally may stand her ground. She knows she has to raise the stakes if she wants to accomplish her goal.

Later, Flo will still have that odd sketchpad sighting on her mind. Before Flo can bring it up to Wyatt, she’ll sense that he’s deeply concerned. Flo will question Wyatt about his latest conversation with Sally, so he’ll bring her up to speed.

Since Sally’s threatening to die unless she gets a “Wally” reunion, Flo will gripe about it being emotional blackmail. Flo will feel like Sally’s gone too far, but Wyatt may rush to his ex’s defense. Sally’s terrified from duped Wyatt’s perspective, so he may think Flo should have a little more sympathy.