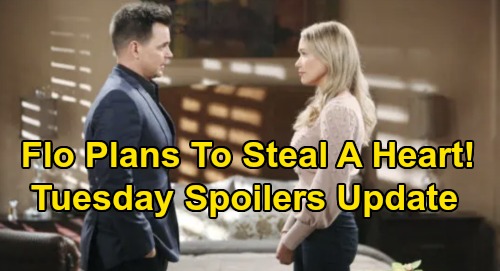 The Bold and the Beautiful (B&B) spoilers update for Tuesday, January 14, teases that Sally Spectra’s (Courtney Hope) efforts won’t measure up – at least not to Steffy Forrester (Jacqueline MacInnes Wood).

B&B fans know Sally’s been having a hard time capturing Steffy’s vision for the line. They’ve teamed up to beat Thomas Forrester (Matthew Atkinson) and Hope Logan (Annika Noelle), but Steffy will express doubt about being able to win.

After Sally shows off her latest designs, Steffy just won’t think they’re good enough to compete at this level. She knows Thomas has some serious talent, so she’ll fear that her brother’s going to help Hope score a victory.

Sally may defend her new fashions and will perhaps argue that Steffy’s not trusting her to do her part. There’ll be some sparring as they prepare for this big showdown, but Steffy’s in charge here. 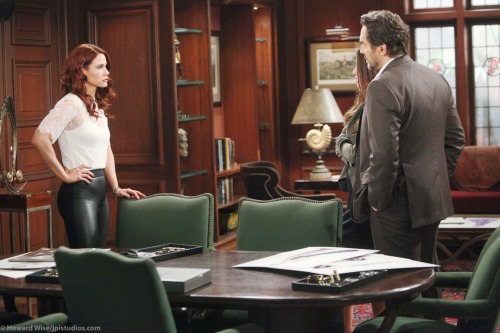 If Sally can’t deliver what Steffy wants, that’s going to be a major issue. Steffy could bring in another designer if Sally can’t get it together, but maybe that’ll serve as motivation to get on the same page. Sally will want to give this project her all, but her fiancé will be focused on his ex.

Wyatt Spencer (Darin Brooks) will decide to pay “Flo” Fulton (Katrina Bowden) a visit on Tuesday. Flo took some time away to clear her head, but she’ll be back in town and ready to settle into her LA life again.

Shauna Fulton (Denise Richards) will urge Flo to pursue Wyatt since he’s not married yet. She’ll think now’s the perfect moment to swoop in and steal Wyatt back from Sally.

Of course, Shauna would probably argue that even if Wyatt and Sally had already tied the knot! However, the fact that they’re not yet wed gives Flo an advantage. Shauna may remind Flo of that during her pep talk before Wyatt arrives.

Once Wyatt shows up, Shauna will leave them alone to chat. The Bold and the Beautiful spoilers say Flo and Wyatt will share some warm moments of reconnection. They’ll express how much they’ve missed each other and get that familiar twinkle in their eyes.

Next, Katie Logan (Heather Tom) will call a special meeting, which she intends to make an announcement at. Flo and Wyatt will decide to attend this meeting together, so that’ll bring another chance for them to bond. The Bold and the Beautiful spoilers say Wyatt’s love life is about to turn into a real mess!

It sounds like Sally’s man is slipping away, some huge twists could change the game before long. We’ll give you updates as other B&B news comes in. Stay tuned to the CBS soap and don’t forget to check CDL often for the latest Bold and the Beautiful spoilers, updates and news.