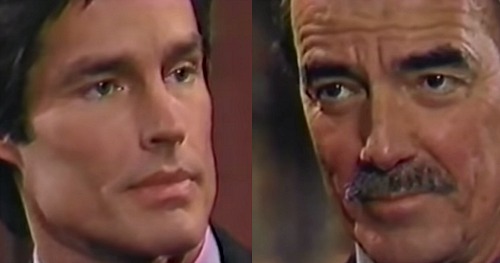 The Bold and the Beautiful spoilers for Tuesday, June 16, tease that viewers will see an encore episode that originally aired on January 29, 1999. The episode will begin as Ridge Forrester (Ronn Moss) and Taylor Hayes Forrester (Hunter Tylo) are trying to enjoy dinner at Café Russe. However, Brooke Logan (Katherine Kelly Lang) and Victor Newman (Eric Braeden) will be noticeably sitting at another nearby table.

Taylor will clamor for Ridge’s attention, and while Ridge will say that he’s listening to Taylor, he’ll clearly be distracted by what’s going on over at Brooke and Victor’s table.

Taylor will get increasingly annoyed as Ridge goes on, making comments about how Victor is all over Brooke. Taylor won’t want Ridge to let the situation ruin their evening.

Brooke will soon ask Victor to kiss her, which Victor will do…very publicly. That will be about enough for Ridge, who will go bonkers and rush over to Brooke and Victor’s table.

Taylor will call after Ridge as he tells Victor that he’s seen enough. Brooke will get smug satisfaction out of Ridge’s reaction, and she’ll sweetly tell Ridge that she and Victor are just celebrating.

Ridge will be peeved, certain that Victor has more on his mind than just a dinner celebration. Ridge will blast Victor and Brooke for making a spectacle of themselves, and Victor will stand up, having had enough.

Ridge will tell Victor that it’s time for him to go home to Genoa City, and Ridge will try to get Brooke to leave with him. Brooke won’t budge, and Victor will say that Brooke isn’t going anywhere. Victor will sit down and put his hand over Brooke’s, infuriating Ridge. Just then, Taylor will come to tell Ridge that she’s paid their bill and that their car is ready.

Taylor will give Brooke a nasty look as she and Ridge take off, and Victor will muse that their little plan worked. Victor will say that it’s time for him to return to Genoa City, and Brooke will be grateful for all of Victor’s help with Ridge.

Victor will wish Brooke luck with Ridge, and he’ll say that it’s a rare person who’s able to make such an impression on him. Victor and Brooke will embrace, then Victor will go.

At Insomnia, CJ Garrison (Mick Cain) and Rick Forrester (Jacob Young) will catch up, and Rick will wonder where Amber Moore (Adrienne Frantz) is. At the hospital, Amber will talk to the doctor and she’ll worry that she might have hurt her baby.

The doctor will tell Amber that she needs another ultrasound, and that while the contractions have stopped, the pregnancy is high-risk and there’s a good chance that Amber won’t carry the baby to term.

Later, Amber will talk with Kimberly Fairchild (Ashley Tesoro), sharing with her that the baby could be in trouble. Kimberly will want Amber to just relax, but Amber will be pretty worked up about the possibility of losing her baby.

Amber will tell Kimberly that if she loses the baby, she loses everything, and that this baby means the world to her.

Kimberly will listen as Amber says that all of her hopes and dreams changed when she became pregnant, and that this baby is a miracle that she and Rick created. Amber will say that this baby is going to have a great life, and she’ll embrace Amber tearfully,

Tuesday’s throwback episode of B&B sounds terrific, so be sure to stay tuned! We’ll give you updates as more B&B news comes in. Here at CDL, you’ll get all the latest Bold and the Beautiful spoilers and news.