The Bold and the Beautiful Spoilers: Tuesday, November 10 – Thomas Struggles Not To ‘Take Hope Now’ – Paris Puts Zoe On The Spot 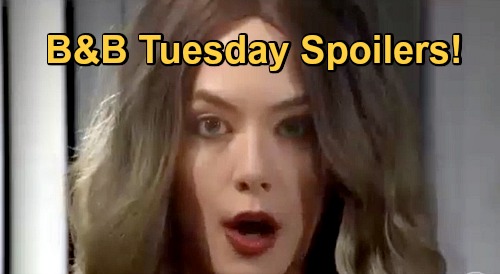 The Bold and the Beautiful spoilers for Tuesday, November 10, tease that Thomas Forrester (Matthew Atkinson) is going to find himself confused and conflicted. As B&B viewers know, Hope Spencer (Annika Noelle) has just come to Thomas’ apartment to see the mannequin that looks just like her.

As Hope and the mannequin were standing side by side, the mannequin told Thomas that Hope wanted him and that he needed to “take her now.”

Well, B&B spoilers for the remainder of the week indicate that Thomas will go on to have a dinner date with the mannequin and that the real Hope will safely make it out of Thomas’ apartment, so that’s a relief.

But it looks like we’ll see Thomas really struggle as he resists what the mannequin is directing him to do. Despite Thomas’ inner psyche going super dark and violent, Thomas should manage to maintain control over himself, which is good news for Hope.

Meanwhile, on the new episode of B&B on Tuesday, November 10, Zoe Buckingham (Kiara Barnes) will be forced to acknowledge her conflicted feelings where Carter Walton (Lawrence Saint-Victor) and Zende Forrester Dominguez (Delon de Metz) are concerned.

As B&B viewers know, Carter is totally into his relationship with Zoe, and he currently has no clue that Zoe is super attracted to Zende as well.

It seems that Zoe will have a talk with Paris Buckingham (Diamond White) on Tuesday’s episode of the show, and Paris will end up putting Zoe on the spot regarding the two men.

Of course, Paris has developed a crush on Zende, and she was a bit confused by the fact that Zoe cautioned her about not getting caught up with Zende. As B&B viewers know, Zoe passed off her concern as overprotectiveness toward her sister, which Paris seemed to buy at the time.

But it seems that Paris may start to get the sense that Zoe has her sights set on Zende as well, and that her concern about Paris getting involved with Zende is really jealousy.

According to B&B spoilers, Paris will end up putting Zoe on the spot regarding her feelings for Carter and Zende, so Paris might start asking some tough questions of her sister where the men are concerned.

One wonders how long it will take Paris to figure out that she’s walked right into the middle of a burgeoning love triangle. And then what will Paris do?

Will Paris stand by and try to help her sister through her conflicted feelings, or will she decide to jump in and make the love triangle into a complex quadrangle? Time will tell, but we sense that Paris might jump right into the mix!

Tuesday’s episode sounds fantastic, so don’t miss it! Keep coming back to CDL so you don’t miss any of the latest soap news and spoilers, and we’ll keep you updated with the latest on the Bold and the Beautiful for sure.