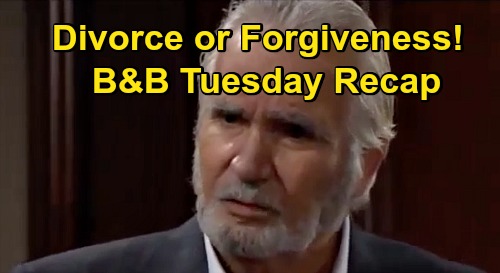 Carter had documentation with him saying that Brooke and Ridge’s divorce is null and void, which thrilled them.

Eric was happy for “Bridge,” saying that now they could move on and that he was sorry about Quinn Forrester’s (Rena Sofer) part in their divorce and Ridge’s marriage to Shauna Fulton (Denise Richards).

Eric lamented that Brooke had tried to warn him about Quinn, and that it never occurred to him that she’d do something like this. Brooke told Eric that it was time to rip off the bandaid and end his marriage to Quinn. Eric looked sad and conflicted.

Zende continued to gaze at his failed text message to Zoe from last night, as Zoe went on about how fortunate she is to have her work and Carter. Zoe wondered what Zende was looking at, and Zende said it was just a text.

Soon, Carter walked in to see if Zoe wanted to have dinner tonight, and Zoe hesitated, saying that she didn’t know when she’d be done tonight. Carter got an alert on his phone and he stepped out, and Zende said that he was glad Zoe told him about her night with Carter.

Zende said that Zoe had every right to be excited about how well things were going for her. “Carter’s a very lucky guy,” Zende noted.

At Spencer Publications, Wyatt Spencer (Darin Brooks) continued talking with Quinn and Flo Fulton (Katrina Bowden). Quinn said that she moved into a hotel to give Eric some space, but that she believed that their marriage would survive.

Flo wondered if Quinn had talked with Shauna, but Quinn said no. Flo said that she didn’t even know where Shauna was, although they had texted with each other.

Flo then impulsively offered for Quinn to stay at the beach house with her and Wyatt, and Wyatt looked like he was going to be ill. Wyatt tried to come up with excuses, but Flo insisted that they were family.

Quinn said that she’d take Flo and Wyatt up on their offer, and she rushed off to run a few errands after telling Wyatt that the situation was only temporary.

Afterwards, Wyatt said that he loved Flo’s generosity, but that she had no idea what it would be like living with Quinn.

Flo said that Quinn needed a stable place and that they needed to be positive – besides, Quinn seemed determined to get Eric to forgive her, and then they’d get their house back to themselves.

At Brooke’s mansion, Brooke and Ridge arrived and briefly talked about the importance of not letting Eric forget everything that Quinn did. Ridge said that he didn’t want to talk about Quinn or Shauna, and that he just wanted to restart their lives together.

Brooke said that she was looking forward to the best years of their lives, and she and Ridge contemplated their future, then kissed happily.

Back in the Forrester CEO office, Eric sat sketching when Quinn walked in. Eric said that he didn’t feel like talking about what had happened, and Quinn said that this is exactly why she left the mansion – to give Eric space.

Quinn divulged that she was staying with Wyatt and Flo, and she said that she was upset that she disappointed the two most important men in her life.

Eric said that he was disappointed and sad that the love they shared wasn’t enough to change Quinn’s view of the world. Eric grumped that he had defended Quinn to everyone, but in the end Brooke was right.

“No, she wasn’t right,” Quinn insisted. “I’ve been a loving and faithful wife to you,” Quinn said, noting that she wasn’t without her flaws.

Quinn insisted that she had changed because of Eric, and that she wasn’t afraid to face what she’s done. “I’ve changed, and it’s because of you that I believe in the possibility of forgiveness,” Quinn said. “I love you, Eric, and I’m not going to give up on our commitment to each other.”

There’s a lot of B&B drama heating up, so stay tuned! We’ll give you updates as B&B news comes in. Stick with the CBS soap and be sure to keep CDL at the ready so you don’t miss any of the latest Bold and the Beautiful updates. We’ve got you covered with all the soap news and spoilers!