The Bold and the Beautiful Spoilers: Tuesday, September 15 – Steffy Gets Secret Drugs From Vinny – Finn Stands Up To Liam 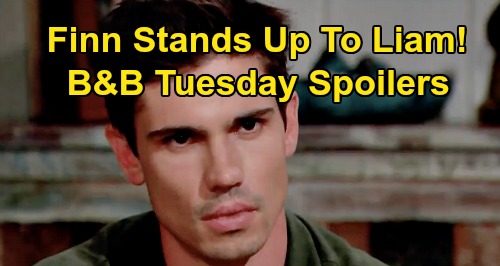 The Bold and the Beautiful spoilers for Tuesday, September 15, tease that Steffy Forrester (Jacqueline MacInnes Wood) will get a significant but dangerous gift. As B&B viewers know, Steffy desperately wanted another refill on her prescription painkillers from John “Finn” Finnegan (Tanner Novlan), but Finn denied her request on the grounds that she needed to step down to over-the-counter pain relievers, and that there was the very real danger that Steffy could become dependent on the prescription meds.

Well, Steffy will still be suffering with pain management, and it looks like news about her struggle will make its way via Thomas Forrester (Matthew Atkinson) to Vinny Walker (Joe LoCicero).

As B&B viewers will remember, Vinny has supplied Thomas with drugs in the past, and he’ll take pity on Steffy and her plight. Vinny has apparently developed a bit of a crush on Steffy, and he’ll want to help her out.

Vinny’s idea of “helping” Steffy will be to score her some illegal prescription-strength opioid pain pills. But he won’t be able to just walk over to Steffy’s and hand off the pills, nor will he want to send them with Thomas, who would probably balk at giving Steffy illegal drugs.

So, Vinny will hide the pills inside a gift that he sends along with Thomas for Steffy. We’ll see how long it takes for Steffy to find the pills. It looks like the whole thing will be Steffy and Vinny’s secret for now.

Meanwhile, on the new episode of B&B on Tuesday, September 15, Liam Spencer (Scott Clifton) will find himself feeling suspicious of Finn. As B&B viewers will remember, Liam was stunned when Hope Spencer (Annika Noelle) told Liam about Finn visiting Steffy and checking up on her at the cliff house.

Well, considering that Liam doesn’t think that Steffy is handling her pain management and recovery very well, it looks like he’s going to question what Finn is up to.

Of course, underlying Liam’s suspicion about Finn will be his realization that Finn could be romantically interested in Steffy. Liam was all good with living Steffy alone and choosing a life with Hope and Beth Spencer (River Davidson and Madeline Valdez) when Steffy didn’t have any other man in sight.

But now that Steffy may be interested in someone new, it’s going to hit Liam that he’s going to have to watch Steffy move on and be with someone else.

There will likely be a period of adjustment for Liam, and in his discomfort over the situation, it looks like he’ll try to pin his frustrations on Finn. We might see Liam quiz Finn about his intentions or even his methods of treating Steffy and her pain.

But B&B spoilers say that Finn will stand up to Liam and his line of questioning about Steffy. It should be an interesting showdown.

It will be interesting to see whether Steffy is present for the Liam/Finn conversation, and it could end up being the impetus for Steffy and Finn’s kiss, which should happen later in the week.

Of course, Steffy is a strong character in general, but given her pain and her vulnerability right now, she needs someone firmly in her corner who’s focused on her and her alone. And that person is going to be Finn. Go Finn!

Tuesday’s episode of B&B is going to be terrific, so be sure to stay tuned to the CBS soap. You won’t want to miss any of the action! Keep CDL at the ready for all of your B&B news and spoilers. – we’ll keep you current with the latest updates.