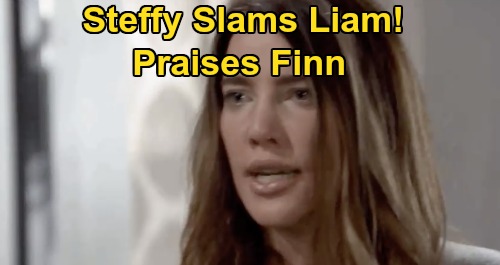 The Bold and the Beautiful spoilers recap for Tuesday, September 22, reveal that Liam Spencer (Scott Clifton) reeled as he held the bottle of pills in his hand. “This is why you were passed out with our daughter in the other room!” Liam fumed at Steffy Forrester (Jacqueline MacInnes Wood).

Steffy fought back, saying that Kelly Spencer (Colette and Avalon Gray) was fine and that Liam had no right to go through her things.

Liam asked how many pills Steffy took, and Steffy denied taking any of them. Liam told Steffy to stop lying to him and to herself. Steffy and Liam argued for a while, with Steffy continuing to insist that she didn’t take any of the pills.

Liam didn’t buy it, and he said that the pills were opioids that are highly addictive and that ruin people’s lives and change their entire character.

Liam then started ranting about John “Finn” Finnegan (Tanner Novlan), saying that Finn prescribed the pills and that his judgment was clouded because he was interested in Steffy.

Steffy then admitted that she took a couple of the pills and crashed, and that Finn didn’t know about the pills. Liam was stunned, and he wanted to know why Steffy was keeping the pills from both him and Finn.

“Isn’t it obvious?” Steffy cried. “I’m in pain and I’ve been in pain ever since the accident, and these are the only thing that gives me relief!”

Liam said that he understood that, but Steffy fumed that Liam doesn’t understand and that he moved on with Hope Spencer (Annika Noelle) and Beth Spencer (River Davidson and Madeline Valdez). “Where does that leave me?” Steffy yelled. “I’m alone!”

Liam looked horrified, and Steffy asked why he was so shocked. “Or is it guilt because you dumped us for your other family?” Liam then continued to grump about Finn and not trusting him, and Steffy unleashed, saying that Finn had been nothing but kind to her.

Steffy yelled that her mother was out of town, her dad was embroiled in his own personal drama, and that Liam’s life was all about Hope and Beth now.

“I need someone who listens, and that doctor is that someone! You left, not me!” Steffy yelled. “You need to go now!” And with that, Steffy walked out of the room in disgust.

When Steffy returned, Liam was walking back into the house with car keys in his hands. Steffy yelled that she told Liam to leave and stay out of her business. Liam said that he was leaving, but that he was taking Kelly with him.

In the cabin, Hope and Thomas Forrester (Matthew Atkinson) talked while Douglas Forrester (Henry Joseph Samiri) played outside. Hope looked at her phone, and Thomas asked if anything was wrong.

Thomas went on about how Liam was over “rescuing” Steffy, and Hope mentioned that Liam’s antennae was up when it came to Finn. Thomas balked, saying that Liam was upset because Finn was interested in Steffy.

Hope noted that Finn probably wouldn’t be Steffy’s doctor much longer, and Thomas said that it didn’t help for Liam to shove himself into Steffy’s life.

Later, Hope had a moment alone, and she flashed back to some of her good memories with Liam. Thomas returned to the room, and again talk turned to Liam’s need to back off of Steffy. Thomas thought that Liam was doing what he always does – become the amazing Boy Scout.

Hope went outside to check on Douglas, and Thomas flashed back to some of his memories of Hope from the past. Hope checked her phone again, and Thomas started in on Liam, but Hope told him to save his breath because Liam wasn’t pining after Steffy.

Hope thought that when Steffy was better, everyone’s life would go back to normal and that Steffy might even find love again. “Not if Liam has anything to say about it,” Thomas said.

That was a terrific episode of B&B, and there’s plenty more coming tomorrow, so stay tuned to the CBS soap! We’ll keep you up to speed on all the latest Bold and the Beautiful spoilers, updates, and news. Here at CDL, we’ve got you covered!