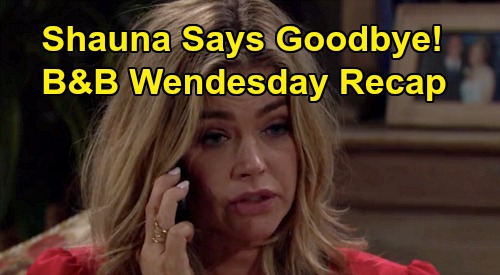 The Bold and the Beautiful spoilers recap for Wednesday, April 15, reveal that Quinn Forrester (Rena Sofer) sat in the Forrester CEO office trying desperately to get Shauna Fulton (Denise Richards) to text her back. Bill Spencer (Don Diamont) walked in, saying Quinn had to know that he’d come after her. Quinn balked, and Bill said that she’s not getting off easy after what she did.

Quinn insisted that the video she exposed wasn’t even about Bill…he just happened to be in it. Quinn explained that she uploaded the video so that everyone would see Brooke Forrester (Katherine Kelly Lang) for the tramp that she is, and to expose her “zilch” commitment to Ridge Forrester (Thorsten Kaye).

Bill insisted that he wouldn’t let this ruin his future with Katie Logan (Heather Tom). Quinn wished Bill the best of luck with that, then ranted about everything that Brooke had done.

Bill mused that Quinn never changes, and Quinn went on about being Forrester matriarch and how no one was going to inch her out from her position. Bill said that Quinn might have had fun and accomplished her goal, but that Katie got hurt, too, and that was unacceptable.

Quinn fired back that it was Bill and Brooke who kissed, and that wasn’t her fault. Quinn warned Bill to keep his distance from Brooke, since she’s incapable of not destroying her marriage to Ridge. “If you really love Katie, stay away from her snake of a sister,” Quinn said.

Meanwhile, Ridge woke up in a bedroom at the Forrester mansion. Ridge was hungover and didn’t know where he was for a moment, then he heard Brooke’s voice saying, “You’re alive,” and oriented to where he was. As Ridge drank coffee, Brooke explained that the Forrester pilot brought him back from Las Vegas.

Brooke went on to explain how she wanted Ridge to come home to her mansion, but that Ridge had wanted to return to the Forrester mansion. Ridge said that the evening before was fuzzy and that he didn’t remember what had happened. Brooke noted that this was Ridge’s second blackout with Shauna.

As Ridge sipped his coffee, Brooke asked how they had “gotten here.” Ridge said that he didn’t know, and Brooke insisted that they were going to get back together and that they’d work this out.

Brooke said that she didn’t know why she kissed Bill, but Ridge said she had to know why. Brooke then admitted that Bill had listened to her, and that’s how it had happened.

Ridge said that he couldn’t stop seeing the kiss in his mind, and Brooke said that it was a stupid, wrong, and thoughtless move on her part, but that she wasn’t going to give up on them.

Brooke said that they were meant to be together, and that they weren’t going to let Quinn or Shauna come between them. Brooke hugged Ridge, and he only slightly hugged back.

Meanwhile, in Las Vegas at Shauna’s apartment, Shauna sat in her apartment reminiscing about the evening before. She flashed back to her big night on the town with Ridge, then recalled them kissing in front of a wedding chapel. Shauna smiled happily at the memory.

Later, Ridge was alone in his room at the Forrester mansion when Shauna called. Shauna said that she wanted to check in on Ridge and make sure that he survived.

Ridge asked when Shauna as coming back to Los Angeles, but she said that she couldn’t do that because proximity to him wasn’t a good thing for her. Ridge thought that it sounded like Shauna was blowing him off, and she said, “Not by choice.”

Shauna told Ridge that she loved him, and that she cherished their memories, then she told him goodbye and hung up. Ridge was stunned, and Shauna cried alone in her apartment.

Next, Wyatt Spencer (Darin Brooks) was at home as he talked with Flo Fulton (Katrina Bowden) on the phone. Wyatt and Flo rehashed their previous discussion about asking Sally Spectra (Courtney Hope) to leave the beach house.

Wyatt disconnected as Sally hobbled into the living room with her walker. Wyatt said that he needed to talk with Sally about her future and where they go from here.

Wyatt asked Sally to reconsider getting medical treatment, but Sally refused. Wyatt urged Sally to fight back, saying that she could possibly win against her illness. Flo then walked in, and Sally immediately sensed that something was going on.

Wyatt gently said that he was grateful to have spent this time with Sally, and Flo interjected, saying that it was time for Sally to move out.

“You’re kicking me out?” Sally said. Wyatt then explained that they were going to look into end-of-life care for Sally in a facility that could accommodate her needs when she takes the inevitable turn for the worse.

Wyatt assured Sally that it wouldn’t be right away, and that relocation takes time, but that they wanted to start the process.

Flo then suggested that Sally could reconsider treatment, too, and Sally balked. Sally tried her best to manipulate, saying that she had stayed too long and that she had probably lived longer than projected because she was living with Wyatt.

Flo didn’t like the sound of that, and Wyatt hugged Sally as Sally looked at Flo, clearly trying to hide her feelings of dislike for her nemesis.

That was a great episode of B&B, and there’s more to come tomorrow! Stay tuned to the CBS soap, and make sure you check back with CDL regularly for all the latest Bold and the Beautiful updates. We’ll keep you up to speed on all the hot new spoilers and daily recaps.