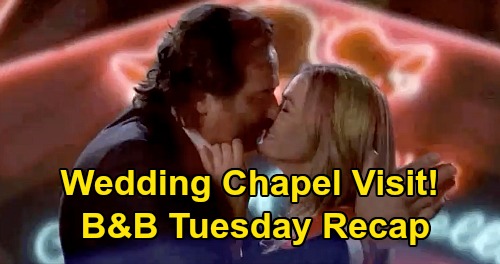 The Bold and the Beautiful spoilers recap for Tuesday, April 14, reveal that Sally Spectra (Courtney Hope) continued her conversation with Dr. Penny Escobar (Monica Ruiz) at the hospital. Penny urged Sally to stop pretending that she was dying, but Sally refused. Penny blasted Sally for using makeup and a walker to appear to be sick.

Sally blasted Penny right back, telling her not to judge. Sally said that her plan would work because deep down Wyatt Spencer (Darin Brooks) loves her, and because Flo Fulton (Katrina Bowden) was complete trash. Sally said she’d fake it until she made it and she even brazenly showed off her trembling for Penny.

Penny noted that Sally shouldn’t get so stressed out – after all, stress is what brought Sally to the doctor to begin with. Penny urged Sally again to end this lie and to go pretend to get treated and cured, or to tell Wyatt the truth. Sally refused, saying that she wasn’t leaving Wyatt, and that Flo was the one who should leave.

Meanwhile, at Wyatt’s place, Wyatt reeled at Flo’s suggestion that he ask Sally to move out. Flo explained that she wasn’t asking Wyatt to kick Sally out onto the street; rather, she was asking for Wyatt to help Sally find a more appropriate place to spend her final days.

Flo noted that Sally could take a major downturn at any time, and that she needed to be in a facility that could meet her needs.

Wyatt had some difficulty with the idea of telling Sally she has to go, but Flo persisted, saying that Sally needs more than Wyatt can give her. Wyatt wondered if this had anything to do with the fact that Sally tried to kiss him, and Flo admitted that she didn’t like that Sally was trying to guilt him into recommitting.

Wyatt then admitted that he had thought about what would happen when Sally needed a higher level of care.

Ultimately, Wyatt realized that Sally needed things like hospice care, nurses, and medical professionals taking care of her. Flo said that this point could be closer than they realize, and that she just has Sally’s best interest in mind. Flo told Wyatt that he had to ask Sally to leave. Wyatt seemed to agree, but he still looked uncomfortable with the idea.

Next, Quinn Forrester (Rena Sofer) and Brooke Forrester (Katherine Kelly Lang) continued their conversation at the Forrester mansion after Eric Forrester (John McCook) had gone to bed. Brooke said that she wanted to know where Ridge Forrester (Thorsten Kaye) was, and Quinn fired back that Ridge needs time alone.

Brooke and Quinn argued for a while over who was at fault for the state of Brooke and Ridge’s marriage, with Quinn saying it was Brooke’s fault and Brooke blaming Quinn and Shauna Fulton (Denise Richards).

Brooke and Quinn continued to trade barbs over familiar issues, and again Brooke asked Quinn where Ridge is. Quinn didn’t answer, and Brooke said she’d find Ridge and there’s nothing Quinn or Shauna could do about it.

At Shauna’s apartment in Las Vegas, Shauna told Ridge that he was important to her and that it meant a lot for her to be with him. Shauna refreshed Ridge’s drink, and she asked if Ridge was still thinking about Brooke and Bill Spencer’s (Don Diamont) kiss. Ridge said he couldn’t shake the memory, and he took a big swig of his drink.

Shauna wondered if perhaps Ridge loved Brooke too much, and if his marriage was simply too tumultuous over the years. Ridge admitted to having great moments with Brooke, yet Shauna wondered if a relationship should really be that much of a struggle. Ridge changed the subject and said that he wanted to go out and have fun.

At Brooke’s mansion, Brooke called Matt the Forrester pilot (Kevin Frazier), saying that she was trying to track down Ridge. Matt said that he wasn’t supposed to reveal that information.

Brooke insisted that this was an urgent matter, and Matt spilled that Ridge was in Las Vegas. Brooke asked if there was another passenger, and if it was Shauna. Matt hesitated, and Brooke knew it was Shauna. “You’re going to have to go find Ridge and bring him home,” Brooke told Matt.

On the Las Vegas strip, Ridge and Shauna partied hard. They were shown living it up and drinking together in a montage set against Las Vegas scenes. Ridge appeared to be having difficulty standing up straight as he and Shauna took in the sights.

In the very last scene, Brooke and Shauna kissed outside a wedding chapel as wedding bells tolled.

That was an exciting episode of B&B, and there’s more on the way, so stay tuned! Keep CDL bookmarked for all the hot new B&B spoilers and daily recaps, and we’ll update you about all the latest Bold and the Beautiful news as well.