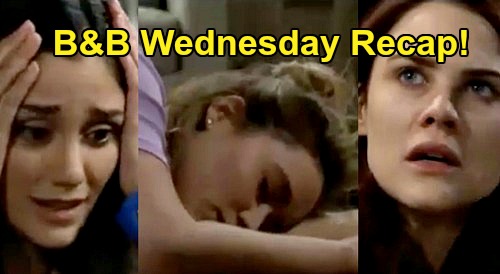 The Bold and the Beautiful spoilers recap for Wednesday, April 22, reveal that Wyatt Spencer (Darin Brooks) was busy working in his office at Spencer Publications when Bill Spencer (Don Diamont) burst in, shouting at someone on the phone. Wyatt noted that Bill seemed to be in a mood, and Bill yelled that he had to move out of his own home.

Bill ranted about Quinn Forrester (Rena Sofer) being to blame for his problem with Katie Logan (Heather Tom), and Wyatt noted that he had just seen Katie.

Bill perked up at that, wondering how Katie was and what she and Wyatt discussed. Wyatt said that they had discussed Sally Spectra (Courtney Hope), and Bill callously asked if Sally was dead yet.

Wyatt squawked at that, then noted that Sally was actually doing pretty well. Wyatt noted that the doctors only gave Sally a few weeks, but she’s done surprisingly well.

Bill said that Wyatt should be proud, but he was shocked to hear that Wyatt asked Sally to move out. Bill at first thought Wyatt meant he was kicking Sally out onto the street, but then Wyatt explained about how he wanted to get Sally settled in a facility that could properly care for her.

Bill eventually understood and supported Wyatt in his assertion that this was the best thing for Sally.

Bill thought that Wyatt had done everything that a person could do for Sally, and that he had gone above and beyond. Wyatt and Bill shared a drink together, and Bill commended his son for having Sally stay at the beach house for any length of time.

Wyatt lamented about being hard on Sally for calling him by Liam Spencer’s (Scott Clifton) name, but Bill said that he had more than made up for that.

Bill praised Flo Fulton (Katrina Bowden), too, for handling Sally’s situation with empathy and grace. Bill said that Sally was lucky to have Wyatt, and that whatever happened, Wyatt would be with Sally in her final days. Wyatt said that he just wanted to be with Sally as much as possible before everything changes.

Meanwhile, at the beach house, Sally told Flo that she made up the story of being sick for Wyatt…because she loves him more than Flo can understand. Flo balked, and Sally said that she wasn’t proud of what she had done, but that she saw Wyatt slipping away and had to do something.

Flo blasted Sally for manipulating everyone, and Sally insisted that Flo was Wyatt’s past. Flo pointed out that both she and Wyatt had been devastated to think they were losing Sally forever, and so was Katie. Sally tried to blame Flo for her actions, but Flo wasn’t buying it, nor would she let Sally play the victim card.

Flo called Sally pathetic and sad, and she said that Wyatt would be devastated when he finds out the truth. Together, Sally and Flo rehashed the details of how Sally perpetrated her fake terminal illness, and Flo recounted how she found out Sally was faking.

Flo started to text Wyatt, but Sally begged her to stop, saying that she’d find a “cure” or think of some other way.

Suddenly, Dr. Penny Escobar (Monica Ruiz) walked in the door. Flo announced that it was over for both Penny and Sally, and that Wyatt and everyone would know what they’ve been up to. Flo told Penny that she read all about Sally’s real diagnosis – stress – on her computer, which led Sally to blast Penny for being careless.

After more rehashing of how Sally and Penny pulled off the ruse, Flo accused Sally of emotionally blackmailing Wyatt and trying to kiss him, and Sally blasted Flo for her part in the Beth Spencer (River Davidson and Madeline Valdez) kidnapping.

Flo said that Sally would lose everything good about her life in Los Angeles, and that Penny would lose her medical license.

Sally begged Flo to keep the secret, and Penny did the same, but Flo insisted that she was going to tell Wyatt, and she picked up her phone. As she started to manipulate her phone, Penny picked up a candle pedestal and bashed Flo over the head! Flo went down, and Sally called out to Flo as she looked at Penny in horror.

That was a great episode of B&B – don’t forget to tune in on Thursday for more great drama! Stick with the CBS soap and remember to keep CDL bookmarked for all the latest Bold and the Beautiful spoilers and news.