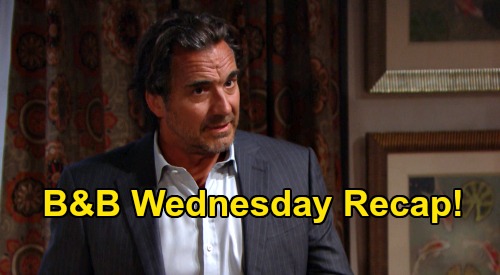 Quinn gushed about how Shauna was now Ridge Forrester’s (Thorsten Kaye) wife, but Shauna wasn’t quite as giddy. Shauna wished that the marriage hadn’t been such a shock to Ridge, but Quinn said that he’d eventually remember the wonderful evening.

Quinn and Shauna continued going back and forth, with Quinn insisting that Shauna should be deliriously happy and Shauna feeling bad that Ridge will never know the “whole story.”

Shauna said that she didn’t like secrets and lies, and Quinn jokingly said that Shauna just didn’t have enough practice. “We pulled off one little scam for the greater good,” Quinn said. Shauna lamented that Ridge still loved Brooke Forrester (Katherine Kelly Lang).

Quinn fired back that Brooke and Ridge would never make it, and that Ridge was much better off with Shauna. Shauna said that Vegas would have been all about fun and games if it wasn’t for what the two of them did, and Quinn mused that what they did was for the greater good of everyone.

Shauna wished that deception hadn’t been necessary, and Quinn said, “All you did was follow my directions. Just blame me.”

Shauna then said that Quinn was a true friend to jeopardize her marriage this way, and Shauna revealed that she was the one who texted Carter Walton (Lawrence Saint-Victor) to file the divorce papers, but that Ridge thinks that he is the one who did it. “If he only knew that we did it for him,” Shauna said.

Meanwhile, at Brooke’s home, Ridge told Brooke that she looked beautiful, and Brooke asked if this was all too much too soon.

Ridge looked miserable, and Brooke went on about how much Ridge meant to her. Ridge said that he felt the same. “Just tell me – we can work through it together as husband and wife,” Brooke said, going on and on about their love and commitment.

Brooke even suggested that it was time for the two of them to renew their vows, and Ridge blurted that there was something he needed to tell Brooke. “Something happened between me and Shauna in Vegas,” Ridge said miserably.

Brooke questioned whether Ridge was really happy that they were back together, and Ridge said, “We’re not together.”

Brooke then got scared and wanted to know what was going on, and she asked Ridge if he’d slept with Shauna. “No, it’s worse than that,” Ridge said. Brooke asked what could possibly be worse than that, and Ridge blurted, “I married Shauna – she’s my wife.”

Over at Forrester Creations, Hope Spencer (Annika Noelle) and Zoe Buckingham (Kiara Barnes) wrapped up some work on Hope For The Future in the design office.

Hope decided to call it a night, then she sensed that Zoe wanted to talk about something. Zoe admitted that she had been afraid that their professional relationship might have been lost, but here they were working together on Hope’s line. Zoe lamented about what her father had done, and what she had done, to Hope.

Hope said that while she might never get over Zoe’s part in everything, that Beth Spencer (River Davidson and Madeline Valdez) was doing great and that she and Liam Spencer (Scott Clifton) were doing great, and that they were moving on from that time. “You deserve the same,” Hope said to Zoe. “It’s time for both of us to let it go.”

In the CEO office, Eric Forrester (John McCook) was working late when Donna Logan (Jennifer Gareis) came in. Donna wondered what Eric was doing at the office so late, and eventually Eric admitted that he needed space and didn’t like choosing sides between Brooke and Quinn.

Eric admitted his frustration with Quinn, but he didn’t mention what had gone down at the Forrester mansion earlier with Shauna’s big marriage revelation.

Donna griped a little about Quinn, saying that she didn’t trust Quinn, especially after the fiasco with the video of Brooke kissing Bill Spencer (Don Diamont). Eric said that he couldn’t defend what Quinn did and that he was very disappointed in her.

Donna noted that Brooke and Ridge were a strong couple and that nothing would break their bond. Eric looked miserable.

That was a great episode of B&B, and there’s more coming this week, so stay tuned! We’ll give you updates as more B&B news comes in. Stick with the CBS soap and keep CDL at the ready for all the hot new B&B spoilers, news, and daily episode recaps – we’ve got you covered!