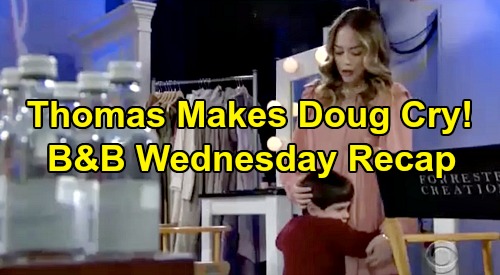 The Bold and the Beautiful spoilers recap for Wednesday, February 12, reveal that Bill Spencer (Don Diamont) sadly marveled to Katie Logan (Heather Tom) about how strong Sally Spectra (Courtney Hope) has always been. Sally sadly said that she’s now facing a fight that she can’t win, and that she would die loving Wyatt Spencer (Darin Brooks). Katie said that she didn’t want to break her promise to Sally, but that she felt that she couldn’t let Sally die alone.

Wyatt then came into the office, and he immediately sensed that something was wrong. He wanted to know what was going on, and Katie gently told him that she had run into Sally at the hospital the other day. Wyatt started getting really worried, and finally Katie told him that Sally was dying and had a month left to live.

Wyatt was absolutely stunned as Katie recounted Sally’s symptoms. Wyatt couldn’t believe that he hadn’t noticed any of the symptoms, and his first impulse was to immediately call Sally.

Katie then relayed that Sally had made her swear not to tell anyone, and that she didn’t want anyone to know. Wyatt was beside himself, saying that no one should have to go through this alone.

Meanwhile, in the Forrester Creations design office, Sally tried to concentrate on sketching, but her hands kept shaking and she threw the pencil down in frustration.

Sally was struggling to stand upright when Eric Forrester (John McCook) and Quinn Forrester (Rena Sofer) entered and invited her to a surprise birthday party for Zoe Buckingham (Kiara Barnes). Sally refused, saying she didn’t feel up to it, then looked sadly as a photo of her and Wyatt on her phone.

Over in the backstage area at Forrester Creations, Vinny Walker (Joe LoCicero) talked with Thomas Forrester (Matthew Atkinson). He told Thomas that using Douglas Forrester (Henry Joseph Samiri) wasn’t right, but Thomas said he knew what he was doing.

Thomas said that Douglas would end up seeing him with Zoe and would worry that Zoe will replace Hope as his mother…which Hope will never let happen.

Vinny wondered what would happen if Douglas didn’t react the way he was hoping, and Thomas confidently stated that then he’d just move with Zoe. Vinny thought it wasn’t cool to think of Zoe as a consolation prize. Thomas then called Hope, who was with Douglas in the Forrester CEO office, to get them to the backstage area.

A bit later, everyone surprised Zoe with a birthday gathering and a festive cake in the backstage area. Everyone was happy and offering cheers to Zoe when Hope and Douglas walked in.

Douglas looked stunned and confused to see Thomas holding Zoe’s hand. Across the way, Quinn cornered Thomas and said that she hadn’t quite worked out Thomas’ angle yet, since she knows that he still wants Hope.

Carter Walton (Lawrence Saint-Victor), who was also present, approached Zoe and said that he didn’t have a gift for her, but that he could offer her free legal advice anytime, and he made sure his number was in her phone.

Thomas then went and asked a blank-looking Douglas to wish Zoe a happy birthday. He did, then Zoe asked if he was having fun, and he said, “I guess.”

Next, Vinny approached Thomas and called him out for messing with Douglas, but Thomas said that he wished that his mother had used him to keep his family together. Vinny was incredulous.

Thomas decided to say a few words to the group about how valuable Zoe was. Douglas looked somber as Thomas went on about how thankful he was to have Zoe in his life. He then gave her some custom Quinn-designed earrings as a birthday gift.

Hope watched all of this go on and was clearly upset, which Donna Logan (Jennifer Gareis) noticed. She asked Hope if she was ok, which Hope wasn’t. She and Douglas then got a prime view of Thomas kissing Zoe, which really upset Douglas.

He turned to Hope and asked her why daddy was kissing Zoe. Hope stated that they’ve gotten close lately, and Douglas asked if Thomas was going to make Zoe his mommy instead of Hope.

Douglas cried that he didn’t want to lose Hope, and Hope hugged him and reassured him that she wasn’t going anywhere. She then looked hurt as she watched Thomas and Zoe kissing, and as Thomas hugged Zoe, he mischievously spied Douglas and Hope hugging.

There’s definitely a lot of action on the Bold and the Beautiful right now, so don’t miss an episode! And be sure to keep reading CDL for the latest in B&B news, spoilers, and updates.