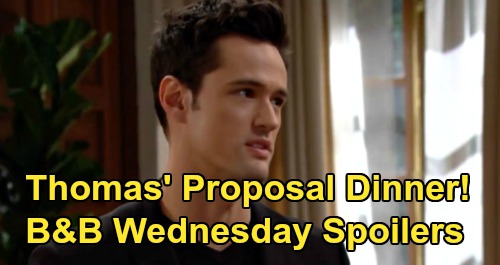 The Bold and the Beautiful spoilers for Wednesday, February 19, tease that Hope Logan (Annika Noelle) will continue to comfort Douglas Forrester (Henry Joseph Samiri). Douglas is all worked up and upset over the fact that his father has been spending time with Zoe Buckingham (Kiara Barnes), and that’s all thanks to Thomas Forrester’s (Matthew Atkinson) devious plan.

As B&B viewers know, Thomas has just sent Douglas off to spill all his feelings and angst to Hope over the fact that he is with Zoe, and the plan is working like a charm.

Thomas is waiting in the wings in the backstage area while Douglas is telling Hope all about how he wants his Mommy and Daddy together, and how seeing his father with Zoe scared him. Hope seems pretty upset by what she’s heard from Douglas, and that’s just the way that Thomas wants it.

Well, Thomas will get even more devious on Wednesday’s episode of B&B. According to the Bold and the Beautiful spoilers, he’ll decide to put his plan into high gear and really force the issue with Douglas and Hope. He’ll decide to host a dinner at the Forrester mansion for his family that will include Douglas, Hope, and of course Zoe as his date.

But it looks like he’ll plan for the dinner to be about much more than just gathering the family for some good food and family fellowship. According to B&B spoilers, Thomas is going to plan on proposing to Zoe right there at the dinner…in front of both Douglas and Hope.

That’s sure to send Douglas into a tailspin, and it will force Hope to think about what’s really best for Douglas in this scenario.

Of course, Thomas will be banking on Douglas having a serious meltdown over the proposal. He’ll probably design the evening around his relationship with Zoe, with plenty of hand-holding and other public displays of affection for Douglas to witness.

And he’ll probably have even coached Douglas to be sure to tell his Mommy all about what he thinks and wants for his family going forward.

B&B spoilers say that Douglas will indeed take center stage at the dinner, so it seems like his reaction to the whole proposal scene will be a major family event. And one can imagine everyone’s reactions to the whole scene.

Ridge Forrester (Thorsten Kaye) and Eric Forrester (John McCook) will probably be surprised but delighted that Thomas is finding happiness and moving on from Hope.

And Quinn Forrester (Rena Sofer) will know exactly what’s going on, so she’ll probably just quietly sit back and watch the show. But Hope will probably end up even more conflicted that ever, as she simultaneously tries to comfort Douglas and tries to figure out how to make his situation better.

Of course, Thomas will be hoping that she ultimately realizes that the best thing for Douglas is for his Mommy and Daddy to be together. We’ll see if she gets any closer to that revelation.

At any rate, look for Thomas to start planning the big dinner and proposal on Wednesday’s episode. He might tell Vinny Walker (Joe LoCicero) all about it, or even Quinn, since the dinner will likely be hosted at the Forrester mansion.

Something tells us that the proposal will be a big surprise that he may keep close to the vest until the minute the action goes down…and it’s going to go down big.

It looks like there will be a lot of B&B drama heating up for Wednesday’s episode! Be sure to stay tuned to the CBS soap, and we’ll be sure you provide updates as more B&B news arises. And don’t forget to check back with CDL for the latest Bold and the Beautiful spoilers, recaps, and news.