BY hellodrdavis on February 26, 2020 | Comments: one comment
Related : Soap Opera, Spoiler, Television, The Bold and the Beautiful 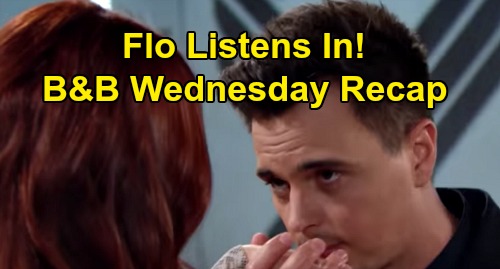 The Bold and the Beautiful spoilers recap for Wednesday, February 26, reveal that Ridge Forrester (Thorsten Kaye) and Steffy Forrester (Jacqueline MacInnes Wood) reeled from Katie Logan’s (Heather Tom) revelation about Sally Spectra’s (Courtney Hope) terminal condition. As they talked in the Forrester CEO office, Steffy and Ridge tried to process the idea that Sally was dying, and that they had just been on the verge of firing her.

Katie went onto explain that Sally didn’t want anyone to know about her condition, and that her symptoms had been interfering with her work. Steffy and Ridge learned that Wyatt Spencer (Darin Brooks) knows about Sally’s condition, but that he’s not letting on that he knows she’s sick. Katie said that Sally’s work was so important to her, and Ridge noted that Sally’s ideas are still good but that she seems to have lost the ability to put then down on paper.

He went on to say that he had made a mistake with Flo, and that this was about what he’d miss if Sally disappeared from his life. Sally said that she still loved Wyatt, and that she had never stopped. She apologized again for calling him by Liam Spencer’s (Scott Clifton) name, and Wyatt said that he didn’t want to focus on regrets. He took her hands and said that he didn’t want to spend another minute thinking about things they couldn’t change.

Wyatt then kissed Sally’s hands and said that he would hate himself if they didn’t try again. Sally got a text from Steffy, who wanted to see her back at the office. Sally lamented that this could be the day that she gets fired, and she joked that she could end up on Wyatt’s couch again. He said it would be ok if she did.

Sally then said that she hadn’t felt this good in a while, and Wyatt vowed to be there for her and not to bail on her. He told her that he wanted to see that beautiful smile on her face last. They hugged, while Flo cried from outside the door as she listened in.

Later, after Sally had gone, Flo and Wyatt talked. Flo said that she really thought that Sally was going to open up to him about her illness, and Wyatt apologized that Flo had to hear the whole exchange. Flo insisted that Sally needed to hear what Wyatt said, and she noted that Wyatt meant the things he said. Flo thought that sally might open up to Wyatt in time.

Wyatt felt bad about what this was all doing to Flo, but Flo said that they needed to do this for Sally – and that Sally had walked in the room broken and Wyatt made her eyes light up. Flo said that they couldn’t make Sally well, but that Wyatt could make her happy. Flo told Wyatt not to hold back with Sally because of her, and they kissed and hugged tenderly,

Back at the Forrester CEO office, Steffy and Ridge finished up their conversation with Katie. Katie left, and Sally came in, disheartened to see Ridge and Steffy there together. She assumed that she was about to be fired, and she noted that they had been going over her designs. As Katie listened at the door, Sally went on about how she had let Steffy and Ridge down, and that she guessed she just wasn’t good at collaborating.

Ridge then showed Sally one of her design sketches that he had tweaked, and Sally said that it was amazing – that it was exactly what she had in mind, but more refined and beautiful. Ridge said that the design would “turn couture upside down” and Sally was stunned. Steffy said that Sally wasn’t fired, but her designs wouldn’t be in her new collection; they’d be in Ridge’s.

Sally gushed that she never thought she’d live to see the day that her designs would be in a couture collection, and Ridge said, “Well, you will.” Sally said that she had never felt more alive as a designer and an artist, and Ridge hugged Sally affectionately, while Katie looked through the door, crying. Ridge seemed emotional, and Steffy was near tears as she watched Ridge hugging Sally.

There’s a lot of B&B drama heating up, so stay tuned! Stay with the CBS soap and be sure to check back with CDL often for the latest Bold and the Beautiful spoilers, updates, and recaps.