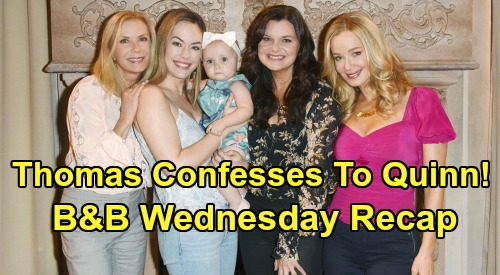 The Bold and the Beautiful spoilers recap for Wednesday, February 5, reveal that Eric Forrester (John McCook) and Quinn Forrester (Rena Sofer) continued their conversation at the Forrester mansion. Eric told Quinn that she needed to make a serious effort to get along with Brooke Forrester (Katherine Kelly Lang), and Quinn protested, saying that Brooke had attacked their marriage and that she had to strike back.

Eric said that he understood that it was human nature to want to strike out, but that he believed Quinn was better than that. Thomas Forrester (Matthew Atkinson) then eavesdropped at the door, hearing that Brooke had slapped Shauna Fulton (Denise Richards) and tried to get Eric to dump Quinn. Thomas’ interest was piqued.

Eric then took off, and Thomas entered to speak with Quinn, revealing he had eavesdropped. Quinn filled in Thomas on the recent goings-on with Brooke, and Thomas learned that Quinn spiked Brooke’s drink.

He said that was “so Quinn” and proceeded to tell her that she shouldn’t retaliate like that – after all, if Brooke becomes a drunken mess again, then Ridge Forrester (Thorsten Kaye) will come to her rescue, which defeats the purpose of all of his hard work.

Thomas insisted that they’d work together from now on to deal with Brooke, but no more spiking drinks. Quinn agreed, and Thomas indicated that mistakes like that could cost him all the hard work he’s done – after all, his manipulations resulted in Bridge signing divorce papers, and that soon he and Hope Logan (Annika Noelle) would be together as well.

Quinn then learned that Thomas was still after Hope and that he was just having fun with Zoe Buckingham (Kiara Barnes) in the interim.

Wyatt and Liam then rehashed the story of Liam and Steffy Forrester’s (Jacqueline MacInnes Wood) kiss, and about how Thomas was still trying to manipulate Hope.

At Forrester Creations, Brooke tried to work in the CEO office but was distracted by the nearby liquor bottles. Hope then came in and asked her if she was thirsty, which startled Brooke. Soon, Steffy walked in the office and Brooke started ranting at her about her kiss with Liam.

Steffy didn’t say much and just let Brooke go on for a moment, but she did note that Liam was staying in her guest room when Brooke insinuated otherwise. Brooke then took off in disgust.

Brooke later showed up at Spencer Publications where she ranted at Liam about his kiss with Steffy. Liam couldn’t get a word in edgewise as Brooke demanded that he fix the situation and move out of Steffy’s house.

Brooke blamed Thomas for everything, but Liam said that he had to take responsibility for the kiss, because Thomas wasn’t involved in that. Brooke wasn’t so sure about that.

Liam then filled Brooke in about how Thomas had admitted that he had been pressuring Steffy for months about reuniting with him, and that Thomas said he belonged with the family he had first.

Brooke was horrified, and Liam assured her that he’d always try to protect Hope from Thomas, even if they weren’t together, but again he stressed that the kiss had nothing to do with Thomas.

Back in the Forrester CEO office, Steffy and Hope continued talking. Hope noted that she couldn’t un-see the kiss and that it was seared into her mind. Hope went on about how she didn’t understand how Liam and Steffy allowed the kiss to happen.

Steffy then said that there was something that Hope needed to know about the kiss, but Hope interrupted her and said that she just wanted to focus on Beth and Douglas Forrester (Henry Joseph Samiri) now.

Thomas then arrived and walked in the room, realizing that Steffy was on the verge of telling Hope about how the kiss came about. Hope greeted Thomas, then went back to rambling about the kiss and about how she showed up right as the kiss was happening.

Steffy looked at Thomas guiltily, and Thomas gave her a “don’t you dare tell” look. Steffy then said that there was an explanation for the kiss.

With Thomas looking insistent and glaring at Steffy, Steffy told Hope that things aren’t always what they appear to be, and that there was more going on…much more than she knew.