The Bold and the Beautiful Spoilers: Wednesday, January 8 – Liam Walks Out On Hope – Thomas Freaks Over Terms of Liam’s Proposal 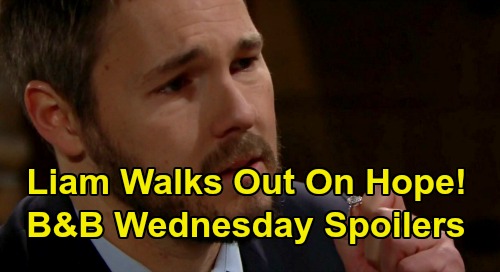 The Bold and the Beautiful spoilers for Wednesday, January 8, tease that Hope Logan (Annika Noelle) will have to give Liam Spencer (Scott Clifton) a serious answer to a very serious question. As B&B viewers know, Liam just proposed to Hope, but when he did so, he also outlined some specific terms that were required for them to get married.

Specifically, Liam asked Hope to cut Thomas Forrester (Matthew Atkinson) from her life, which would mean ending her work collaboration with Thomas and her co-parenting of Douglas Forrester (Henry Joseph Samiri).

Hope looked absolutely mortified by the condition that she needed to stop being a legal parent to Douglas, and B&B spoilers indicate that her answer won’t be what Liam wants to hear.

It looks like Hope will either say a resounding no, or she’ll hem and haw enough that Liam will get frustrated. At any rate, B&B spoilers say that Liam will ultimately walk out on Hope, saying that he can’t do this anymore. That doesn’t bode well for their relationship at all, but it looks like Hope may have additional problems later, when Thomas hears about the conditions of Liam’s proposal.

Exactly how Thomas will find out about Liam’s proposal remain to be seen, but B&B spoilers say that he’ll certainly hear about it, and that he’ll flip out when he learns about the conditions attached.

This could indicate that Hope will be actively considering Liam’s terms, or at least that Thomas will be under the impression that she’s considering them, and that will probably strike fear in him.

After all, Thomas has been working very hard to get Hope to agree to work collaboratively with him at Forrester Creations. He essentially slept with Zoe Buckingham (Kiara Barnes) and embarked on a relationship with her so that Hope would feel that he was safe to work with. And he’s managed to get Hope to accept a co-parenting relationship with him, which he doesn’t want to see threatened.

Meanwhile, on the new episode of B&B on Wednesday, January 8, Ridge Forrester (Thorsten Kaye) will have some advice to impart on his daughter.

As B&B viewers know, he and Steffy Forrester (Jacqueline MacInnes Wood) have been spending some time together at the cliff house, and it seems that Ridge will decide that it’s time for a little talk.

Ridge has long believed that Steffy belongs with Liam, and that she, Liam, and Kelly Spencer (Zoe Pennington) should be together as a nuclear family for the long term.

In fact, Ridge recently told Carter Walton (Lawrence Saint-Victor) that he was glad that Liam hadn’t yet proposed to Hope, and that he thought Steffy and Liam still loved each other. It looks like he’ll voice the same sentiment to Steffy on Wednesday’s episode.

Of course, Steffy may balk at that, noting that while a part of her will always love and be connected to Liam, he’s with Hope now. But Ridge will probably persist, and make his feelings known that she belongs with Liam.

Ongoing B&B spoilers say that Steffy and Liam will wind up kissing later in the week, so perhaps Steffy will take her father’s words to heart.