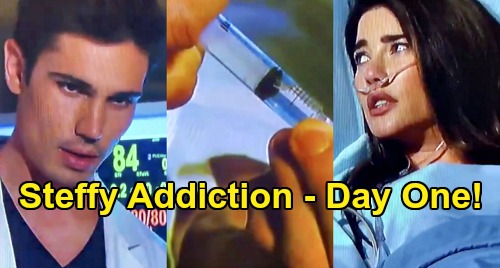 Detective Sanchez wondered if Bill was speeding, or if his view of the road was obstructed, and Bill said no, just that he couldn’t stop in time. Bill relived the accident, saying that Steffy’s motorcycle appeared out of nowhere, and afterwards he saw through Steffy’s visor that it was her.

After Detective Sanchez left, Bill lamented about how they hadn’t heard anything about Steffy since Ridge Forrester (Thorsten Kaye) went into see her. Brooke Forrester (Katherine Kelly Lang) told Bill that Dr. John “Finn” Finnegan (Tanner Novlan) had gone in the room, and that Ridge was still in Steffy’s room.

“I need to see Steffy,” Bill said. “I did this to her. It’s my fault, my responsibility. I need to know what’s going on.”

Meanwhile, in Steffy’s room, Steffy groggily asked Ridge what happened. Ridge told Steffy that she was in an accident, and Steffy immediately asked about Kelly Spencer (Colette and Avalon Gray).

Ridge said that Kelly was fine, but that Steffy was on her motorcycle and was hit by a car. Steffy moaned in pain, saying that it hurt. Ridge told Steffy to hold on, that the doctor was coming.

Ridge was very concerned about Steffy’s pain, and Dr. Finnegan reassured him that Steffy was stable. Dr. Finnegan then examined Steffy, and he seemed pleased that she had no head trauma or spinal injuries.

Steffy said that it really hurt to move and to take deep breaths. Ridge interjected that if Steffy’s complaining about pain, then it must be really severe.

Ridge returned to the waiting area, and his smile faded as he saw that Bill was still there. Ridge relayed that Steffy was awake, and Bill was incredibly thankful. Bill and Ridge started arguing immediately. “Every time my daughter’s in pain or hurting, you’re involved,” Ridge fumed.

Ridge then told Brooke that Steffy had no head trauma or spinal injuries, but that she had some fractured ribs. Ridge turned to Bill, saying, “Every time she moves, it feels like a knife in the chest. She’s in agony because of you. You did that.”

In Steffy’s room, Dr. Finnegan administered pain meds through an IV to Steffy, telling her she’d be more comfortable soon, “What is this?” Steffy asked. “Something to help with the pain,” Dr. Finnegan said. The meds started to take effect, and Steffy responded by relaxing a bit.

Over at Sally Spectra’s (Courtney Hope) apartment, Wyatt Spencer (Darin Brooks) ranted at Sally, griping about how she manipulated and lied to everybody.

Sally wanted a chance to explain, saying that she didn’t mean for everything to get so out of control and that she would have done anything to get Wyatt to stay with her. “I couldn’t lose you,” Sally said.

Penny Escobar (Monica Ruiz) interjected that she had tried to reason with Sally, and Flo Fulton (Katrina Bowden) blasted Penny for still going along with it.

Sally rehashed everything that she had done, starting with how she had gone to the doctor because she thought something was really wrong with her, and then Katie Logan (Heather Tom) had come along and offered kindness.

Sally explained that she then concocted her plan, using Katie to tell Wyatt about the supposed terminal illness. “I expected Flo to fight it and get jealous,” Sally said. “She didn’t,” Wyatt said.

Sally said that she’d take it all back if she could, and that knowing how much she hurt Wyatt is worse than dying. Wyatt ranted some more about the manipulations and lies.

Sally kept protesting and explaining herself, lashing out at Flo for tricking her with the rubber snake and being “terrible” to her. Flo balked, saying that she had never been terrible to Sally.

Penny said that she was ashamed of herself, and Sally begged Wyatt not to get the authorities involved, saying that Flo was never in real danger. Sally went on, getting more and more worked up as she tried to explain how she didn’t want to get pushed aside for Flo again.

Sally got more upset and ranted about how Wyatt made promises and a commitment to her, and that they shared hopes and dreams together. “I’m just begging you not to call the cops,” Sally pleaded, and she cried as she lamented that she didn’t want to be alone.

Suddenly, Sally started hyperventilating and dropped to the floor, collapsing in a heap. Wyatt called out to Sally, but Sally didn’t move.

That was a terrific episode of B&B, and there’s plenty more coming up this week, so stay tuned! We’ll give you updates as more B&B news comes in. Remember, here at CDL, we’ve got you covered with all the latest B&B news, daily episode recaps, and news.