BY hellodrdavis on March 24, 2020 | Comments: 2 comments
Related : Soap Opera, Spoiler, Television, The Bold and the Beautiful 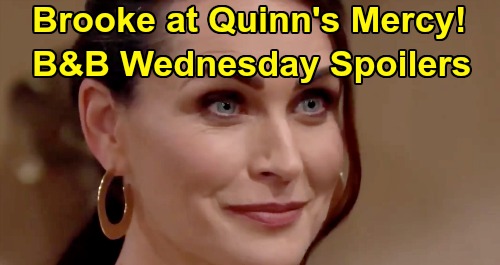 The Bold and the Beautiful spoilers for Wednesday, March 25, tease that Brooke Forrester (Katherine Kelly Lang) will have some choice words for Quinn Forrester (Rena Sofer). As B&B viewers know, Brooke has just confronted Quinn at the Forrester mansion about the video of herself kissing Bill Spencer (Don Diamont), and Quinn has basically admitted to being the one who uploaded the video to the digital feed.

This came after Donna Logan (Jennifer Gareis) saw the video as it played out on Brooke and Ridge Forrester’s (Thorsten Kaye) digital picture frame. Donna was horrified, and that led her and Brooke to scramble to remove the video from the feed.

Fortunately for Brooke, she and Donna were able to wipe out all the media from the feed, so that disaster was averted for the time being.

But Brooke is going to realize that she’s still got a major problem on her hands. It should become apparent pretty quickly that Quinn still has a copy of the incriminating video, and that she plans on exposing it to Ridge somehow.

According to B&B spoilers, Quinn will thoroughly enjoy toying with Brooke about the video, which will infuriate Brooke. She’ll let Brooke know that this is her payback, and that there’s nothing Brooke can do about it.

Of course, Brooke and Quinn’s feud will be going on while time ticks away and the reunion party that Brooke and Ridge have planned gets closer. Unfortunately for Brooke, she’s going to be unable to stop Quinn, as ongoing B&B spoilers say that Quinn’s plan will ultimately play out to the party guests. It certainly looks like everyone’s eyes are going to be on that video before the party is through.

While Brooke and Quinn continue to argue at the Forrester mansion, guests will start to arrive to the reunion party at Brooke’s place. According to B&B spoilers, Donna will be a nervous wreck as she plays hostess in Brooke’s absence. Things should get especially difficult for Donna as Katie Logan (Heather Tom) and Bill arrive at the party.

Donna will know about Bill’s kiss with Brooke and she’ll probably want to lash out, but she’ll have to keep it all in. She won’t want Katie to find out about the kiss, since she knows that it would absolutely devastate her younger sister, so that will be on her mind. Plus, Donna will be worried about where Brooke is, since she knows that Brooke took off to go confront Quinn.

We’ll see how this all works out, but given that Katie and Ridge will ultimately lay eyes on the video, Quinn will likely re-upload the video to the feed after she’s done toying with Brooke over the whole thing. However it happens, it’s going to be quite a scene, and it will result in Brooke paying the ultimate price.

Be sure to tune in on Wednesday to see what happens between Brooke and Quinn! We’ll give you updates as more B&B news comes in. And remember to check back with CDL often for all the latest Bold and the Beautiful news and spoilers.