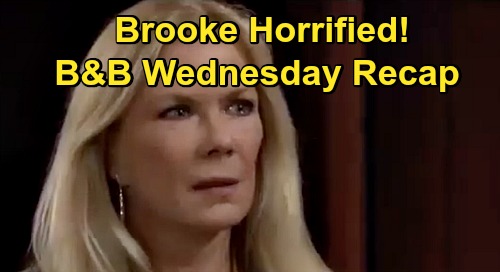 The Bold and the Beautiful spoilers recap for Wednesday, September 30, reveal that Ridge Forrester (Thorsten Kaye) and Quinn Forrester (Rena Sofer) spoke at the Forrester mansion.

Quinn pivoted the discussion to Shauna Forrester (Denise Richards) and the possibility of having another wedding ceremony there at the mansion.

Ridge said that Steffy didn’t want him to put his life on hold for her, and Quinn pounced on that, saying that Ridge and Shauna should have their ceremony asap and that she’d plan everything.

Quinn then impulsively called Shauna on a video call – Shauna was out on a hike with Flo Fulton (Katrina Bowden). Quinn put Shauna on speaker, and she gushed that she and Ridge were just talking about having a wedding ceremony at the mansion.

Quinn totally took over the conversation, saying that Shauna should get a chance to throw the bouquet in Brooke Logan’s (Katherine Kelly Lang) direction.

Shauna seemed horrified by Quinn’s words, as was Ridge. But Quinn went on, saying that Shauna was the wife that Ridge deserved. Shauna said that she didn’t want Ridge to feel pressured, and then Ridge piped up and said that Quinn might be right about this one.

“I think I owe it to you – let’s do another ceremony,” Ridge said.

Ridge took off for the office, and Quinn was thrilled. “This is really going to happen!” Quinn gushed to Shauna. “Imagine the look on Brooke’s face when she finds out!”

Quinn then noticed that Shauna wasn’t exactly excited about the wedding, and Shauna lamented that she couldn’t forget about what really happened in Vegas and how they manipulated Ridge.

Quinn didn’t want to hear any of this, and she told Shauna to let it go. Shauna said that sometimes she feels like telling Ridge the truth about what she did, but Quinn balked, saying that they needed to do the ceremony tomorrow and get Brooke out of the way now.

Quinn told Shauna that what they did to Brooke and Ridge’s relationship is a secret that they’ll take to their graves.

Meanwhile, in the Forrester CEO office, Brooke and Donna Logan (Jennifer Gareis) spoke briefly about Steffy and how she’ll get through her problems. Zoe Buckingham (Kiara Barnes) walked in with some things for Ridge and Steffy to look at, and she acknowledged that she had heard about Steffy, too.

Talk then turned to Brooke and Ridge’s relationship, and Zoe gently asked about their marriage. Brooke filled Zoe in on how Ridge didn’t remember his wedding to Shauna.

Zoe then broached the topic of whether Brooke still had issues with her due to her involvement in keeping Beth Spencer (River Davidson and Madeline Valdez) from Hope Spencer (Annika Noelle), and after a little back and forth, Brooke said that she believed that Zoe regretted what she did.

Zoe was very grateful, and then talked turned back to Ridge’s “sham” marriage to Shauna.

Donna took off to meet someone for coffee, and Brooke noted that Donna had been very cryptic about whom she was meeting. Brooke asked if Zoe was seeing anyone, and Zoe said that she was, but that it was early in the relationship.

Zoe said she hoped to find true love one day like Brooke and Ridge’s – one that endured all obstacles.

Later, Brooke was alone when Ridge arrived. After briefly talking about Steffy’s situation, Ridge said that he was appreciative of Brooke’s concern for his daughter, and that there was something they needed to talk about – his marriage to Shauna.

Brooke got excited, thinking that perhaps Ridge was remembering the night he got married and realized he’d been deceived.

But Ridge said that wasn’t it – rather, he was married to Shauna and they had made a commitment. Ridge said that Shauna deserved to have another ceremony at the Forrester mansion asap. Brooke looked absolutely horrified.

There’s a lot of B&B drama heating up, so stay tuned! We’ll give you updates as B&B news comes in. Stick with the CBS soap and be sure to keep CDL bookmarked for for the latest Bold and the Beautiful spoilers, daily episode recaps, and news. We’re your best source for soap news!