The Bold and the Beautiful Spoilers: Week of March 2 Preview – Steffy Blasts Thomas Over Plan to Marry Hope Instead of Zoe – Wedding Chaos

BY Heather Hughes on February 28, 2020 | Comments: one comment
Related : Soap Opera, Spoiler, Television, The Bold and the Beautiful 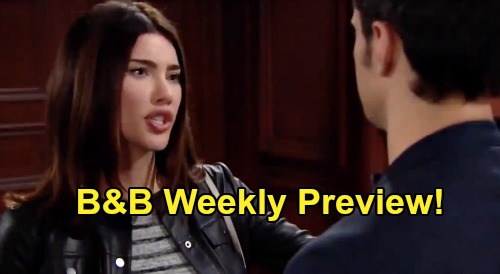 The Bold and the Beautiful (B&B) spoilers for the week of March 2-6 tease that some heated confrontations are coming up. B&B’s weekly preview features loads of drama – and Thomas Forrester’s (Matthew Atkinson) manipulation is at the center of it all. Thomas will stir up more trouble with a big announcement, which will certainly upset Douglas Forrester (Henry Joseph Samiri).

With Zoe Buckingham (Kiara Barnes) by his side, Thomas will insist that they’re getting married right away. Douglas will cling to Hope Logan (Annika Noelle) as he cries, “No! I don’t want that!” The Bold and the Beautiful spoilers say Thomas will be pleased since this has been his plan all along. He’s using his own son’s pain to manipulate Hope – and Zoe’s being used in the process.

Hope will face off with Thomas over this rushed wedding and the emotional turmoil Douglas is dealing with. She may urge Thomas to slow down and put Douglas first, but Thomas will insist on moving full-speed ahead with the nuptials. He won’t see why they should wait since Hope has made it clear she doesn’t want a united family.

Of course, Thomas will just be trying to pile on the guilt and convince Hope to see things his way. Soon after Hope and Thomas’ showdown, Liam Spencer (Scott Clifton) will have a chance to weigh in. Hope will pay Liam a visit and seek his advice, but she’ll surely know what he’s going to say. Liam has always been adamant that Thomas isn’t a good guy and hasn’t changed at all.

The Bold and the Beautiful spoilers, updates and news say Liam will stand by his view in the week ahead. He’ll maintain that Thomas knows exactly what he’s doing and is using his son in a “sick, twisted way.” Liam will contend that Zoe’s being used as well and will inevitably end up heartbroken. He’ll want Hope to open her eyes and see that Thomas’ obsession is as out of control as ever.

As for Steffy Forrester (Jacqueline MacInnes Wood), she’ll eavesdrop on a conversation she wasn’t meant to hear. It won’t be long until Steffy confronts Thomas and blasts him for his sneaky plan. Steffy will assume that Thomas intends to push Douglas to his breaking point.

B&B’s weekly promo shows Steffy saying, “Are you going to push Douglas until he begs Hope to stop the wedding? And then what? Is she going to marry you instead?” Thomas won’t look happy about Steffy’s theory, which seems spot-on. He’ll argue with his sister and pressure her to let this ride, but Steffy will have other plans!

The wedding planning begins this week on #BoldandBeautiful. 💍 Don't miss it! pic.twitter.com/JjNuK22HzA