The Bold and the Beautiful Spoilers: Who Does Ridge Wind Up With – Brooke Rescues Hubby, Flo’s Health Crisis Distracts Shauna?

BY Sean O'Brien on May 10, 2020 | Comments: Leave Comments
Related : Soap Opera, Spoiler, Television, The Bold and the Beautiful 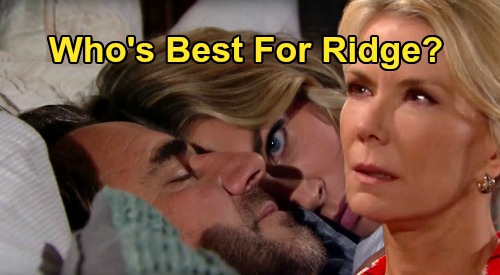 The Bold and the Beautiful spoilers tease that Brooke Logan (Katherine Kelly Lang) can build on the momentum shift she created. After rescuing Ridge Forrester (Thorsten Kaye) from Shauna Fulton (Denise Richards), Brooke will gain a renewed opportunity to be with her one true love because of Flo Fulton’s (Katrina Bowden) health crisis that resulted from Penny Escobar’s (Monica Ruiz) blow to the back of her head.

Flo has been unconscious since last month, which is a wink to the last new B&B episode that aired in April. It’s an easy leap to believe that Shauna will be by her bedside during likely needed recovery time.

Of course Brooke and her supporters would see retrieving Ridge from Las Vegas, Nevada, where he was out on the town with Shauna, as heroic. Others, starting with echoes of Stephanie Forrester’s (Susan Flannery) opinion about her son pairing with this particular woman, would vehemently disagree.

Hardcore fans know that Ridge’s mother never liked Brooke. She always thought that he’d face problems and eventually split from the woman he sees as his true love.

Stephanie’s outlook proved to be both right and wrong. Bridge did marry, originally on the beach in Malibu, in one of B&B’s most memorable location wedding scenes, but then divorced.

However, Bridge revivals have continued through the years, starting with the original Ridge, Ronn Moss’, and continuing after Kaye became the recast in 2013. Kaye’s daytime chops were honed when working as Patrick Thornhart on One Life To Live in 1997. He then played Patrick’s twin brother, Ian Thornhart, on Port Charles, from 2000-2003. Kaye also portrayed Zach Slater on All My Children from 2004-2011.

Shauna flew from Vegas to be with her daughter in Los Angeles, California. They reunited with the former Fuller’s and in time Flo learned that her actual biological father was Brooke’s beloved, late brother, Storm Logan (William deVry).

Richards’ character comes from a similar working-class background like Brooke, which initially helped them to bond after the reveal of Storm as Flo’s father. However, Shauna’s interest in Ridge grew and then, when Flo was caught up in the Beth Spencer (Madeline Valdez and River Davidson) arc, Brooke turned on both ladies.

Ridge’s interest in Shauna is more than fleeting. He’s truly taken by her, as she projects fun, whereas Brooke represents past and current drama.

Love matters, so no one in LA, or within the audience can definitively rule out a Shauna and Ridge marriage. But the odds on him staying with Brooke might prove to be better.