The Bold and the Beautiful Spoilers: Who Will Destroy Hope & Liam – Thomas or Steffy To Blame for Failed Reunion?

BY Heather Hughes on May 28, 2020 | Comments: Leave Comments
Related : Soap Opera, Spoiler, Television, The Bold and the Beautiful 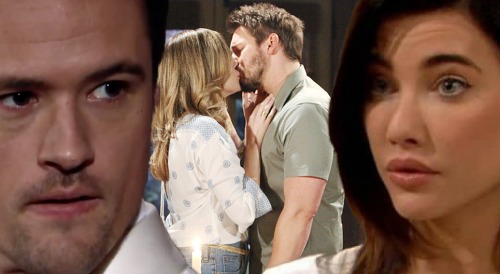 The Bold and the Beautiful (B&B) spoilers tease that Liam Spencer (Scott Clifton) and Hope Logan (Annika Noelle) are back on solid ground, but there’s no guarantee this reunion will stick. In fact, it’s almost guaranteed that it won’t based on “Lope’s” history!

There’s no denying that Hope and Liam love each other, but there’s also no denying that they can’t seem to make their relationship last. B&B has to keep the drama going, which means more problems and more breakups. Sooner or later, Hope and Liam will inevitably split once again. They always do!

It’s best to just accept and expect a “Lope” split due to the pairing’s track record. With that in mind, we have to wonder who’ll be responsible for the next round of drama. Who will destroy “Lope” – Hope or Liam? There are certainly a few different ways for B&B to make this couple crash and burn.

For starters, Hope could start to trust a reformed Thomas Forrester (Matthew Atkinson) – at least when it comes to his son. That doesn’t mean Hope would necessarily fall for Thomas, but she might see that he’s well enough to be a stable, beneficial presence in Douglas Forrester’s (Henry Joseph Samiri) life.

Liam might think Thomas was pulling the wool over Hope’s eyes all over again, but Hope might see it as simply doing what’s best for Douglas. If Thomas can straighten up, he needs to be in Douglas’ life. Douglas already lost his biological mother, Caroline Spencer (Linsey Godfrey), so he doesn’t need to lose Thomas as well if it can be helped.

That’s one way B&B could destroy “Lope” primarily from Hope’s end. Naturally, there’s also the potential for Liam to be the main destruction culprit. Whenever Liam’s with Hope, it’s usually just a matter of time before he decides he wants Steffy.

There could be some pining and even “Steam” cheating down the road. Liam could easily be to blame if his relationship with Hope falls apart.

It could even be a combination of Hope and Liam’s mistakes, but it seems likely this reunion will crumble at some point. The Bold and the Beautiful loves to switch up their couples, so Liam and Hope’s bliss may be short-lived. As other B&B news emerges, don’t forget to stop by for updates.