The Bold and the Beautiful Spoilers: Why Do Steffy And Hope Allow Liam To Keep The Love Triangle Alive?

BY Sean O'Brien on May 17, 2020 | Comments: Leave Comments
Related : Soap Opera, Spoiler, Television, The Bold and the Beautiful 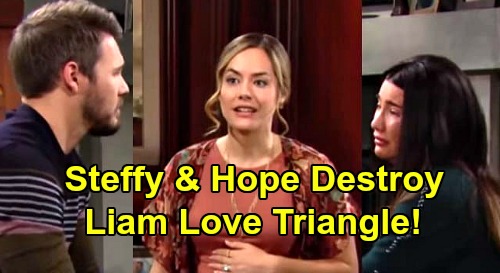 As B&B fans recall, Steffy was prepared to raise Kelly Spencer (Avalon and Colette Gray) without Steam existing two summers ago. She sent Liam back to Hope, with that decision later reversed by Noelle’s character.

Through more recent events and many past storylines, fans continue to wonder why Steffy and Hope continue to allow Liam to repeat the pattern of disrupting their lives?

Steffy and Liam are clearly a love match. But the problem is Clifton’s character also cares as deeply for Hope.

There’s no legitimate argument where the children are concerned. As both Steffy and Hope agree, Liam fully cares for both of his daughters. He’s a good father. But that doesn’t excuse, or even explain, how he’s treated Steffy through the years.

Fans recently saw a classic episode where Steffy’s connection to Wyatt Spencer (Darin Brooks) eventually led to a Steam reunion. So, Liam’s feelings have ebbed and flowed for years, which implies that painful process will continue.

Hope convinced herself that Douglas needed a mother figure. On that plot point she was right, as was Thomas Forrester (Matthew Atkinson). But choosing to send Liam back to Steffy so that she could marry Thomas was the wrong choice.

Months later, Hope has been able to revive Lope because she knew that Liam would respond. Hope and Steffy recognize that Liam loves them and is tied to both of their lives through the girls, Beth and Kelly. As of now Hope seems to hold greater space in Liam’s heart, but that perception has changed in the past and surely could again.

Bold And The Beautiful Spoilers – Bill Spencer’s Personality Passed On

Liam isn’t entirely like his father. But since discovering their blood tie and as the years have passed it’s become fair to suggest that Liam’s waffling between Steffy and Hope is somewhat comparable to Bill Spencer’s (Don Diamont) vacillations between Katie Logan (Heather Tom) and Brooke Logan (Katherine Kelly Lang).

Love isn’t based on reason and no one should expect it to be. But at some point Steffy and Hope will have to say no to Liam one last time, right? That question is just one reason why this classic soap loop is compelling.