BY Sean O'Brien on May 16, 2020 | Comments: Leave Comments
Related : Soap Opera, Spoiler, Television, The Bold and the Beautiful 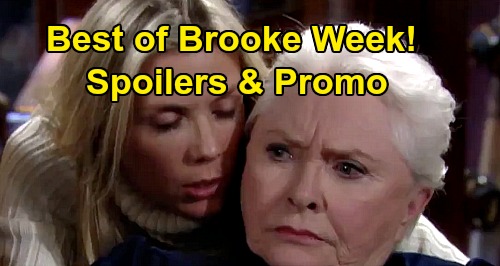 The Bold and the Beautiful spoilers document that Katherine Kelly Lang (Brooke Logan) is looking forwarding to watching next week’s classic throwback episodes of B&B. The theme “Best of Brooke” will include five shows that focus on Lang’s iconic character.

The actor is one of only two remaining original characters from B&B’s debut year (1987). John McCook (Eric Forrester) is the other, with his character being one of Brooke’s past husband’s, father of two of her children, and enduring close confidant.

Lang posted two stunning photos of herself on Instagram, with a comment aside of them that said, “I am so excited that @boldandbeautifulcbs is going to do a “Best of Brooke” week next week! I can’t wait to see what episodes they choose! Lots to choose from in the last 33 years lol?”

Fans will see Brick’s 1991 wedding to start the week. That will be followed by an episode where Lauren Fenmore (Tracey Bregman, during a crossover period from The Young and the Restless) aids Brooke with a plan that involves Taylor Hayes (Hunter Tylo).

Friday’s show focuses on Thorsten Kaye’s (Ridge) edition of this character, with Brooke being surprised to see her true love.

Lang’s three-decade plus career in the soap opera world is impressive. However, the actor started in show business in 1979. She later appear on the celebrated situation comedy, Happy Days, and other popular television shows including Crazy Like a Fox, The Fall Guy, The Magical World of Disney, First and Ten, and the original Magnum P.I.

The four-time Daytime Emmy Award nominee crossed over to B&B’s parent show, Y&R, appearing as Brooke in 1999 and 2007. This year she co-starred in the feature film, Stan the Man. Lang also has one film, Diabolika, that’s been completed, but hasn’t been released, and another, The Christmas Dance, that’s in post-production.

Bold And The Beautiful Spoilers – Brooke Logan Focused On Love

But B&B fans know that Brooke and Ridge’s storied history includes extended periods of time when one character, or the other, has opted to end their union.

The current showing of classic episodes is allowing fans to appreciate the performances that Lang and all of her castmates have given through the years. These shows also enable longtime viewers to revisit memories and newer fans to gain an education in daytime history.

You know you love her. 💙 Don’t miss “The One, The Only Brooke Logan” Week with episodes featuring @KatherineKellyL next week on #BoldandBeautiful! pic.twitter.com/kp64vhuqFQ