The Bold and the Beautiful Spoilers: Zoe’s Wedding Revenge, Dumps Thomas at the Altar – Steffy Sets Up Brother’s Downfall? 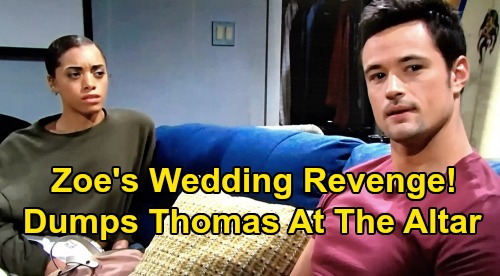 The Bold and the Beautiful (B&B) spoilers tease that Zoe Buckingham (Kiara Barnes) will struggle to drown out the doubters. During the week of March 2-6, Thomas Forrester (Matthew Atkinson) will kick his plan up a notch. He’ll insist on getting married right away, so he’ll naturally say all the right things and sell Zoe on the idea.

For almost everyone else, this will only raise more red flags. The Bold and the Beautiful spoilers say Carter Walton (Lawrence Saint-Victor) will urge Zoe to open her eyes. He’ll probably think this mad-dash to the altar is nothing more than an attempt to win Hope Logan (Annika Noelle) over – and that’s exactly what it is.

Furthermore, Carter will feel like Zoe’s settling for less than what she’s worth. He’ll insist that Zoe can do so much better than a guy who’s in love with someone else. Of course, Zoe will be reluctant to turn against Thomas. She wants to believe Thomas when he reassures her about their future together.

However, it looks like Zoe will begin to see the light as her wedding day with Thomas approaches. There’s a good chance Steffy Forrester (Jacqueline MacInnes Wood) will have something to do with that. After eavesdropping on a conversation she wasn’t meant to hear, any faith Steffy had in Thomas will crumble.

It appears Steffy will overhear Vinny Walker (Joe LoCicero) and Thomas discussing his ultimate goal of being with Hope. B&B fans can expect a heated confrontation between Thomas and Steffy soon after.

Steffy will rip into her brother over his past mistakes and how history’s repeating itself. Sadly, Thomas is too infatuated with Hope to ditch his plan. He’ll leave Steffy with no choice but to explore other options.

The Bold and the Beautiful spoilers, updates and news say Thomas’ creepy plan will begin to fall apart – and that may be due to Steffy’s blabbing. Will she take any new details she’s learned to Zoe? Will Steffy be the one to push Zoe over the edge and make her realize Thomas doesn’t want her?

Whatever the case, this wedding ceremony will move forward during the week of March 9-13 – at least from Thomas’ perspective. He’ll have no idea that his scheme’s about to explode in his face. It sounds like after Steffy spills, Zoe may make a big show about exposing Thomas’ deception and dumping him in front of everyone.