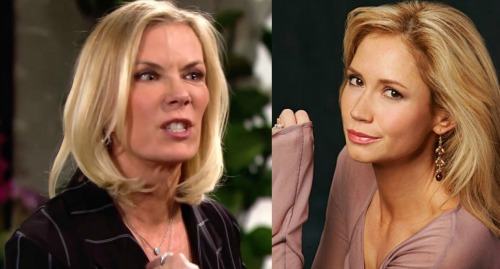 The Bold and the Beautiful (B&B) spoilers ask if the return of Bridget Forrester (Ashley Jones) will unpin Brooke Logan (Katherine Kelly Lang) as the unofficial matriarch of both the Logan and Forrester clans. Brooke has a rather shady past with her own daughter Bridget – let’s not forget that she slept with and had a daughter – Hope Logan (Annika Noelle) – with Bridget’s former husband Deacon Sharpe (Sean Kanan).

The Bridget-Brooke mother and daughter duo seem to have gotten over their past, or have they. Bridget’s loves for her father is strong, Eric Forrester (John McCook), and she’s not naïve towards her mother’s machinations.

With a battle brewing between Brooke and Quinn Forrester (Rena Sofer) that Brooke for the most part has been fuelling, by targeting Quinn’s BFF Shauna Fulton (Denise Richards) over Shauna’s relationship with Ridge Forrester (Thorsten Kaye).

Brooke has even demanded Eric, Quinn’s husband, to end his marriage with Quinn. Such boldness from Brooke is expected, because she believes she’s entitled to be the matriarch of the Forrester clan due to her two children whom Eric sired.

Nevertheless, Bridget is not easily swayed by her mother’s antics; as she has been on the receiving end of Brooke’s bad behaviour. Bridget’s love for her father is very strong as she wants him to be happy – what child wouldn’t.

If that person who makes Eric happy happens to be Quinn, then there is little doubt that Brooke won’t win any battle she engages in with Quinn where Bridget is concerned.

Quinn may find a Forrester/Logan ally with Bridget since neither of have crossed the other. No to mention, Quinn has been playing nice with the encouragement of Eric. That is more than we can say for Brooke’s attempts to expose the evil side of Quinn. Who’s really the bad one at this point?

Let’s not forget that soon, the pending wedding between Zoe Buckingham (Kiara Barnes) and Thomas Forrester (Matthew Atkinson) could bring back Taylor Hayes (Hunter Tylo) who could be a proven ally to Quinn against Brooke as well. There definitely is no love lost between these two as Brooke has gone after Taylor the same way she is going after Quinn.

Will Eric’s beloved daughter, Bridget, help him see that Brooke should not be given preferential treatment over Quinn. Will Brooke’s past with Bridget catches up to her and lead to Quinn’s victory – and ultimately Shauna’s? Let’s stay tuned to the CBS soap and return to CDL for all the best B&B spoilers, news and updates!