The Bold and the Beautiful Spoilers: Liam Declares Love For Hope – ‘Steam’ Shattered After Steffy’s Confession, ‘Lope’ Back On

BY hellodrdavis on March 1, 2020 | Comments: 3 comments
Related : Soap Opera, Spoiler, Television, The Bold and the Beautiful 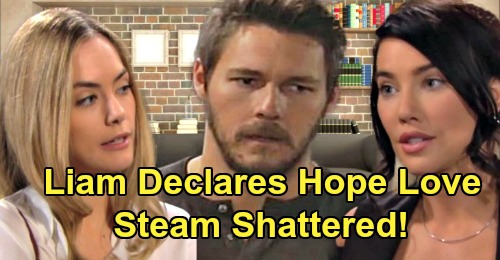 The Bold and the Beautiful (B&B) spoilers tease that fans will see ‘Steam’ shattered and ‘Lope’ back on before long. Steffy Forrester (Jacqueline MacInnes Wood) will soon find her belief in her brother Thomas Forrester (Matthew Atkinson) shattered. As B&B viewers know, Steffy fell victim to one of Thomas’ manipulative plans, but she didn’t quite know the true intent behind the plan. It all centered around her kiss with Liam Spencer (Scott Clifton) on the cliff that Hope Logan (Annika Noelle) witnessed.

Of course, Thomas orchestrated the whole thing, and his main motivation was to drive a wedge between Hope and Liam, and to get Liam out of the picture so that he’d have a shot with Hope at some point in the future.

But the way Thomas pitched it all to Steffy was quite different. He drew Steffy into the scheme by appealing to her desire to have Liam close by and as a permanent fixture in Kelly Spencer’s (Avalon and Collette Carlish) life.

According to B&B spoilers, Steffy will get seriously peeved when she overhears a conversation between Thomas and someone else that’s not meant for her ears.

This person will be Vinny Walker (Joe LoCicero), but whatever the case, Steffy will apparently hear Thomas’ true motivation behind getting her to kiss Liam, and she won’t be happy about it.

She’ll end up in a fierce argument with Thomas, and it looks like that plus Thomas’ decision to push for a quick wedding to Zoe Buckingham (Kiara Barnes) will make Steffy fully realize that Thomas is still manipulating to get Hope back.

The Bold and the Beautiful spoilers say that Steffy will be distressed enough by this development that she’ll end up going to Liam and confessing Thomas’ role in their kiss on the cliff.

Well, that’s going to be big news for Liam, and it will probably be pretty hard to hear. After all, Steffy has kept the secret about how their kiss came about for several weeks now, and she’s stayed mum even when Liam has reassured her on more than one occasion that she’s not to blame.

But now Liam will find out that Steffy knew exactly when to time her kiss – that is, at the moment Thomas cued her via a phone call.

Could we see Liam utterly explode over this revelation? Sure, he’ll be angry with Thomas, but he probably won’t be that surprised that Thomas would stoop to a cheap tactic like that.

But Liam will probably be floored that Steffy would go along with Thomas’ scheme and kiss him at the precise moment that she knows Hope is watching. Liam might realize in an instant that his decision to choose Hope in the first place, and not Steffy, was the right one!

In fact, this might be the very thing that pushes Liam right back into Hope’s direction. The Bold and the Beautiful weekly spoilers for March 2 to March 6 state that Liam declares his love to Hope!

Liam’s long felt protective of Hope, but lately he had been waffling back in Steffy’s direction. Well, the news that Steffy was willingly involved in one of Thomas’ schemes could lead him right back to Hope and Beth Spencer (River Davidson and Madeline Valdez).

We’ll see what happens, but Steffy’s role in Thomas’ plan could be the final nail in ‘Steam’s’ coffin. Do you think that Steffy and Liam have reached the end of the road? Are you ready for the rebirth of ‘Lope?’ Stay tuned to the CBS soap and don’t forget to check back with CDL often for all the latest Bold and the Beautiful news and spoilers.