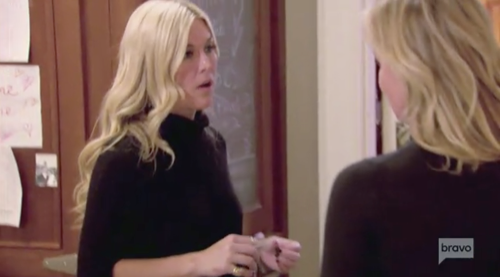 Tonight on Bravo TV The Real Housewives of New York airs with an all-new Thursday, April 30, 2020, episode and we have your RHONY recap below.  On tonight’s Real Housewives of New York season 12 episode 5 “Not So Model Behavior,” as per the Bravo synopsis, “It’s fashion week in NYC. Sonja is preparing for her “Sonja, by Sonja Morgan” fashion show and the ladies sit front row for Tinsley’s big return to the runway. Luann plans her new cabaret show, “Marry, F, Kill,” while Leah fears that Sonja resents her for comments she made.”

Tinsley is with her mother meeting her fashion designer friend. Tinsley is going to close out his fashion show. Meanwhile, Ramona has to go to Fashion Week. She is working out to feel and look better before hitting the shows.

Ramona has been working on a new line all summer. She meets with her team to get organized for the big week. She is all nerved up. She isn’t going to sleep until the show is over.

Tinsley is at the fashion show. She sees her dress she will be wearing. Tinsley’s mom is with her. They. Both start crying. All the ladies arrive. Dorinda shares that she is going to support Tinsely even if it is Disney like fashion. Tinsley walks the runway. They all notice she has that spark.

Luann runs to get her hair done before the next show. She heads to see the girls. They all meet and end up talking about their weekend together. Ramona is annoyed that Tinsley trashed the bedroom she stayed in. She got sauce on the bedding and left bottles everywhere.

Sonya is on her phone when the fashion show starts. Ramona is annoyed. Sonya is panicking and Dorinda thinks it is because she is not organized. Lea misses the show which Ramona thinks is rude.

They head to lunch. Dorinda gets grossed out when Ramona talks about getting oysters. Sonya is on her phone. She doesn’t want to get off of it. She freaks out. She needs to go home. They tell her to sit and calm down. Lea shows up. They are annoyed she skipped the show. They all tell her it was rude. She tells them that she had a family issue. Her parents are upset she drank on her weekend away.

Leah starts crying. They all listen and comfort her. Her mom is upset and won’t speak to her. Tinsley starts to talk about her hair. Dorinda is annoyed. She wants to dig her brains out with her knife. They all start to argue about what to order for lunch.

The next day, Sonya works on her show. Leah meets with a reporter to talk about her brand. He discusses her line and how she broke through what was a man’s world. She finishes and then talks to her ex Rob. They talk about her drinking. He thinks she made a bad choice.

Dorinda meets with her make-up artist. They talk about her and John. He went to an event the other night, sneaking out of the house. She was not happy. He should want to be home or with her. She needs transparency.

Sonya is getting ready for the show. Already the flowers look bad. Luann calls. She tells her what is going on. Sonya gets back to yelling at her staff to get it together. Dorinda shows up and sees her freaking out.

Leah and Tinsley are headed to the show in the car. Sonya sent Leah a dress and she isn’t wearing it because it was hideous. She thinks Sonya is pulling some passive aggression business. Tinsley thinks the opposite.

Sonya is still freaking out. John shows up and Dorinda is completely confused. They all talk about what Sonya sent Leah.

The show starts. Tinsley wants to know where the lights and music are. Leah thinks is clearly not a fashion show. After, she gives Sonya her clothes back. Sonya is annoyed. This is her moment. Sonya puts the clothes on and struts around her show.