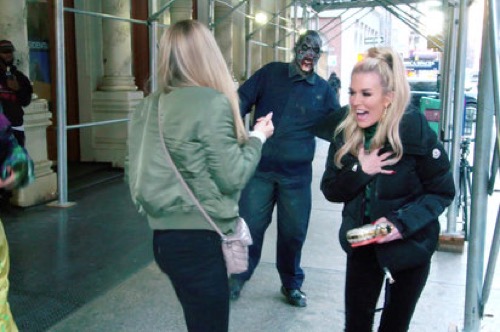 Tinsley returns from Chicago with a life-changing decision and major relationship update but soon realizes some of the ladies aren’t interested. Ramona brings Dorinda and Sonja to Long Island to help plan her birthday party.”

Ben and Roger are doing some planning the variety show when Luann arrives. Sonja arrives next, they are going to try to fit her in the show somehow. Luann tells Sonja that she will get paid for her performance. Comedians come in to interview for the show, Peter is first, then Amanda, Chris, and Zach; they were all good. Sonja goes up on stage, she and Luann do a little comedy skit.

Tinsley is at home with her dogs Strawberry and Shortcake when she calls Leah. Leah asks her what is going with Scott, Tinsley says it is great. Tinsley just got from two days with Scott in Chicago. Leah tells Tinsley about Dorinda’s Halloween party, she wants her to be there.

The women arrive at Blood Manor together, they are not even inside and they are afraid of the characters outside. Inside, it is really scary, there are horrific characters jumping out at them, screaming, noises, blood, and very creepy characters. All the women are screaming, Ramona says she almost peed in her pants. Afterward, all the women are shaking and head to a tequila bar.

They all get drinks and Leah tells everyone that they should make a toast to Tinsley and Scott. Dorinda, Ramona, Sonja, and Elyse change the subject and stop talking about nothing. Dorinda is telling Ramona not to talk to Tinsley. Luann asks Tinsley where is the ring. Tinsley sarcastically tells Dorinda that she is happy for her. Dorinda says she has a turkey baster, she can give it to Tinsley so she can have a baby. Dorinda and Ramona get up to leave, the rest leave after them.

Sonja goes to see Michael, Heather, and Lulu at Century 21 – they have looked at her collection. They want to carve out a front and center space in their largest store, and they want to showcase it in another store. Long-term thinking is that if everything goes well, they want the collection in all their stores. They are moving fast, in the next two weeks they are placing the order.

Ramona, Sonja, and Dorinda meet up – they go to a warehouse to check out some stuff for Ramona’s birthday party. The place is on Long Island, the women thought it was in Manhattan. She is inviting sixty girlfriends, she wants to do a sophisticated jungle. Dorinda thinks she should do a joint party with Sonja, Ramona says no, this is about her, her coming-out party because she is single. Ramona thinks Dorinda and Sonja are jealous that she has sixty girlfriends. Sonja says if she mentions it again, she is going to vomit. Dorinda says it is always the Ramona show. Before they leave, Larry Scott, the owner of the company, asks them to do a promo photo for social media, Dorinda is annoyed.

Leah is at home, she says that being a mom of a teenager she is reminded every day that she is not cool. She says a lot of people don’t understand her relationship with Rob, they parent together, don’t live together, and don’t sleep together.

Ramona is at a bar, Tinsley show up, she tells her that she wants her to be happy. Ramona felt bad that she ignored her in front of Dorinda. Luann shows up and surprises them. It means a lot to Tinsley that the two of them reached out with her and wanted to meet up. All of a sudden, Ramona’s dad, Rob, shows up. Luann asks Tinsley if she is going to Halloween, she says no, she is going to Chicago and won’t be there. Ramona gives Tinsley a hug and tells her that she is happy for her. Luann does the same, the two tell her that they are there for her and they want to see that ring when she gets it.

The next day, Tinsley is with her mother Dale packing up. Her mother starts crying, she says everything is changing. Tinsley knows that she needs to do this, or she will regret it for the rest of her life. Leah shows up, Tinsley pops a bottle of champagne. Leah is really happy for Tinsley, she would love to have even 10% of Tinsley’s optimism. Ramona arrives, just in time to have champagne. Ramona is putting her doubts behind her, she wishes Tinsley nothing but the best.